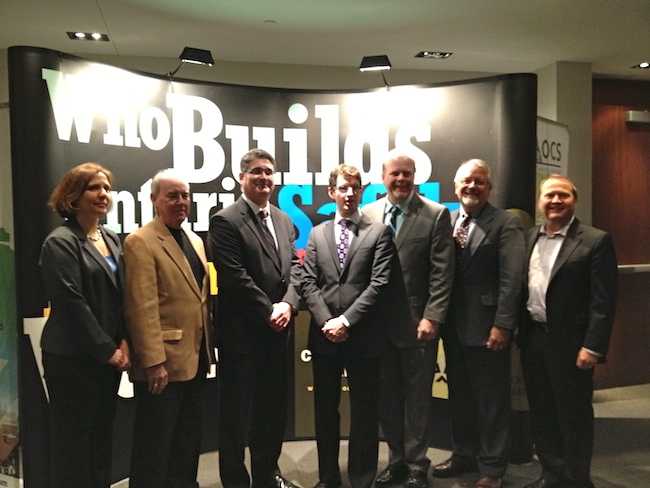 March 14, 2013 – Ontario’s industrial, commercial and institutional construction industry is feeling positive about its prospects in the coming year, announced the Ontario Construction Secretariat (OCS) at its 13th annual State of the Industry and Outlook Conference this month.

The OCS Construction Barometer, based on an Ipsos-Reid survey of 550 contractors, hit a rating of 60 (on a scale of 100), a “clear indication that the business outlook in the province is strong in 2013, with more in the industry feeling positive about this year than they did in 2012,” said the OCS. The barometer is up three points from last year, marking the first increase in expectations since 2010.

The barometer gauges contractors’ perceptions of business conditions over the next 12 months. Measured on a scale of zero to 100, a reading above 50 indicates the amount contractors who expect to conduct more business in the coming year is greater than those who do not. The larger the gap above 50, the greater the level of optimism.

“More contractors are expecting to do more work this year than last,” said Sean Strickland, CEO of the OCS. “The barometer is pointing to increased investment and increased opportunity for job creation in the ICI construction sector. We are seeing particular optimism across southern and central Ontario—through the GTA, from Niagara to Windsor and north into Barrie and Muskoka.”

However, expectations in Eastern Ontario, particularly around Ottawa, have dropped from nearly 60 on the 2012 Construction Barometer to below 50 this year.

Cronkwright gave an update on Ontario’s Feed-in Tariff (FIT) program, where he highlighted key findings from the FIT and microFIT programs. With 4546MW of FIT contracts executed, 10,577MW of existing FIT applications and just under 825MW received in smallFIT applications, he called the response “overwhelming”. He also noted construction jobs as the majority of jobs created by the FIT and microFIT programs.

“There’s a need for renewal and refurbishment, but the key challenge is finding people to do the work,” said Cronkwright.

Arnone spoke about the Darlington Nuclear Generating Station (DNGS), a 15-year mega-project in Clarington, Ont., requiring eight years of construction and about 30 million hours of field work. He also noted the OPG is pushing to achieve a 20% apprentice requirement.

Keynote economic speaker Derek Burleton, deputy chief economist at TD Bank Financial Group, and Katherine Jacobs, director of research and operations at the OCS, provided an overview of the construction outlook in Ontario.