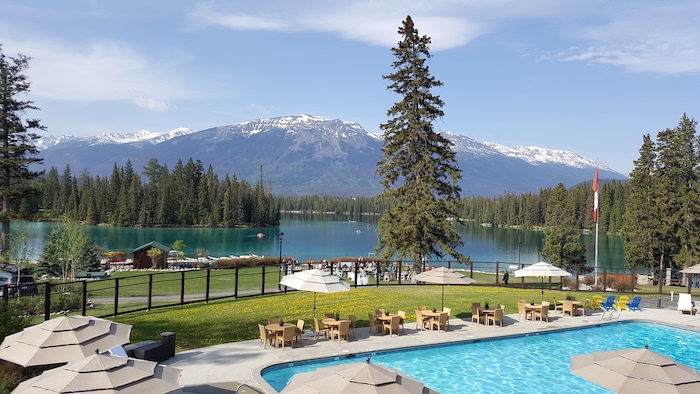 Over the course of the convention, the smoky haze faded away, revealing views across Lac Beauvert. Photo by Peter Saunders

June 4, 2019 – As wildfires burned elsewhere in the province, members of the Electrical Contractors Association of Alberta (ECAA) travelled under smoky skies to meet at the Fairmont Jasper Park Lodge (JPL) for their annual convention, which ran from May 30 to June 2.

At the start of the proceedings, the smoke even made it difficult to see the Rockies clearly. Over the course of the next few days, fortunately, winds shifted, rain fell and the sky became blue again, revealing Jasper National Park’s famous views along Lac Beauvert. In between those extremes was a packed schedule for delegates from across Alberta (and a handful of us from farther away).

Pre-convention activities on May 30 included a golf tournament at JPL’s own club and a BBQ dinner reception on Trefoil Lake, allowing for plenty of time outdoors before the indoor sessions of Training Day on May 31.

Training Day
The educational sessions spanned technical and more general-interest topics, all of which were delivered in timely fashion, reflecting recent and ongoing changes within and affecting the electrical industry.

“There’s no consistency in terms of who installs them,” he said. “What an electrical contractor does in some places, the fire department does in another. Everything may seem fine, but when something bad happens, it unravels and everyone wants to escape liability.”

Suggesting codes and logic do not always coincide with each other, Tsisserev asked contractors to be “absolutely vigilant” about the codes and standards that apply to their work.

“You have to understand other codes and be able to challenge those who would argue with you,” he said. “We need to understand integrated systems and apply logic wherever there are no clear rules.”

He was followed by Rene Leduc, president of hazardous location (hazloc) inspection consultancy Marex Canada, with a review of 2018 CE Code rules for impedance grounding devices (IGDs), which are used to limit the magnitude of ground-fault currents, minimize damage to equipment and stabilize voltage. In particular, he discussed new rules he helped develop that dictate when non-continuous IGDs must be de-energized before electricians can work on them.

“We get requests for changes, but when we introduce them, sometimes we screw them up,” he admitted. “Organizations are being told to de-energize in scenarios where they shouldn’t have to, given other protections are in place. There is now a proposal with CSA to deal with these problems in 2021. It’s not a done deal, but it would address situations where the code currently requires immediate de-energization by instead allowing some time.”

“We should be paying more attention to shocks than to arc flashes, which are more likely to damage equipment than a person,” he said. “Risk assessments have gotten so blown out of proportion, some people think it’s against the law to work energized. It’s just not true.”

Like Tsisserev, Becker encouraged electrical contractors to know the CE Code, then apply it to documentation and an energized electrical workflow, including a safety review checklist.

“Documentation may slow you down, but it solves a lot of problems,” he said. “You need to identify if you are exposed to hazards. You require a justification for energized electrical work.”

“New industrial facilities are using arc-resistant switchgear,” he added. “It will become the norm in the future.”

Other new technologies got the spotlight when Get Vigilant’s John Knoll covered smart home wiring and Johnson Controls business development manager Joe Davis explained how fire alarms and other systems have been upgraded for ‘smart buildings.’

“There is a growing trend in construction driven by the Internet of Things (IoT) and integrated systems,” said Davis. “Don’t get left behind!”

“Alberta is the only province where telecommunications is designated a trade,” Burke said. “We’re now seeking to define ‘low-voltage electrical contractor’ as a mandated trade.”

AGMs
The convention wrapped up on June 1 with a series of annual general meetings (AGMs).

Notably, during the Professional Electrical Contractors’ (PECs’) AGM, members voted unanimously to move forward with a new Professional Master Electrician (PM Elec) designation. The idea is to recognize those who perform technical evaluations of products and installations, as subject matter experts, after electrical engineers have designed and reviewed them and prior to implementation. In essence, PM Elecs verify engineers’ work on behalf of their clients.

Finally, Tim Tarita of Magnum Electric in Grande Prairie handed over the presidency of ECAA to Terry Barnett of K&L Electric in Lloydminster, who had previously served as vice-president (VP).

“It will be an exciting year,” said Barnett. “This is the greatest time to get younger members involved with the association. There is so much mentorship from so many smart people. Be a member, not a competitor. It’s not about you, it’s about the association and your trade. This is the best trade in the world!”