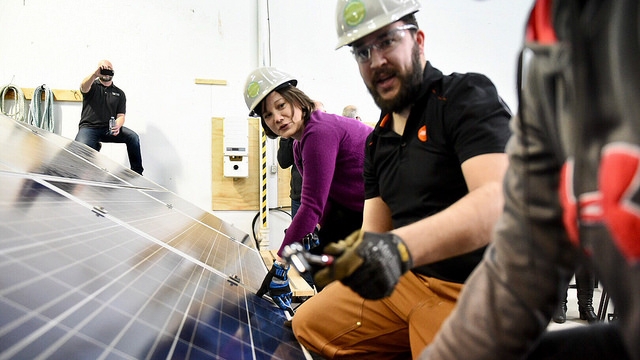 February 28, 2017 – The Alberta government is creating a $36-million rebate program for solar installation on residential and commercial buildings.

Homeowners, businesses and non-profit organizations will receive rebates for rooftop solar panels that meet the Residential and Commercial Solar Program requirements as early as this summer, the province states.

“There’s a lot of buzz in Alberta around small-scale solar. This program will make solar power affordable for more Albertans, leading to new panels on 10,000 Alberta rooftops by 2020. Along the way, we will create jobs and local expertise in an emerging industry,” said Shannon Phillips, minister of Environment and Parks and Minister Responsible for the Climate Change Office.

Solar uptake has doubled in Alberta since 2015, says Alberta, after initiatives like the Alberta Municipal Solar Program and the On-Farm Solar PV Program took off. Over the next five years, the Residential and Commercial Solar Program will build on these existing programs. By 2019, the province expects the program to:

• Support the creation of 900 jobs in Alberta’s solar sector,
• Cut solar installation costs by up to 30% for residences and up to 25% for businesses and non-profits.

The government is posting a Request for Proposal to identify a third party to deliver the new program. Details will be defined in coming months, including qualifying systems, installation and eligibility requirements.