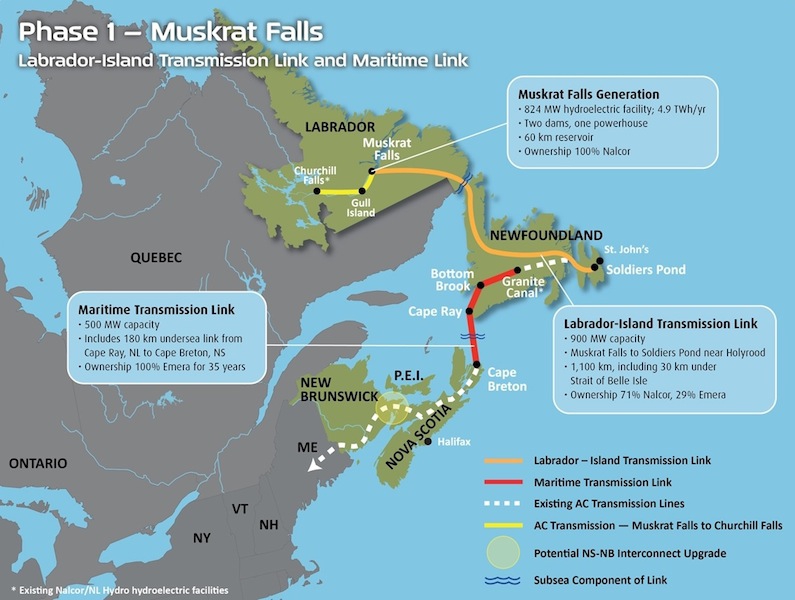 December 11, 2013 – The federal loan guarantee for Nalcor’s Lower Churchill projects has been finalized, and will apply to up to $5 billion of project debt for the Muskrat Falls Hydroelectric Generating Station, the Labrador Transmission Assets and the Labrador–Island Transmission Link.

An additional $1.3 billion of debt for the Maritime Link will also benefit from the loan guarantee when the agreement is finalized for that project, say the feds. The guarantee will lower the costs of borrowing for the proponents, they added, with projected savings of over $1 billion for ratepayers in Newfoundland & Labrador and Nova Scotia.

“This is an important step towards realizing the full potential of one of North America’s most ambitious clean energy projects,” said Rob Moore, regional minister for Newfoundland & Labrador, and minister of state (Atlantic Canada Opportunities Agency). “The Lower Churchill projects will generate major economic benefits and create thousands of high-quality jobs in Newfoundland & Labrador.”

The Lower Churchill River Projects will create about 1500 jobs during each year of construction, say the feds. The Muskrat Falls Hydroelectric Generating Station alone will provide about 3100 direct jobs during the peak of construction. The projects are also expected to inject more than $1.9 billion in economic activity in Newfoundland & Labrador, and deliver nearly $300 million in revenue to the provincial government during construction.