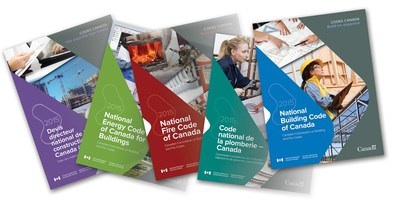 July 12, 2016 – About 600 changes were introduced in the 2015 editions of the National Model Construction Codes, now known as Codes Canada.

Some of these bigger changes include:

• All buildings in Canada will now be designed for earthquake forces regardless of the level of hazard,
• New design requirements will improve accessibility of stairs and washrooms,
• Increased run dimension of steps inside houses from the current minimum of 210 mm to a new minimum of 254 mm could reduce fall incidences by up to 64%,
• New requirements to flow rates in showers will reduce water usage in buildings,
• Additional protection measures such as higher standards for automatic sprinkler systems will allow for the construction of six-storey wood buildings.

The federal government has announced an additional $40 million over five years to integrate climate resilience into building design guides and codes, says National Research Council of Canada (NRC). Funding will support revised national building codes, and the guides integrating climate resiliency into the design and rehabilitation of public infrastructure will be ready for adoption in 2020.