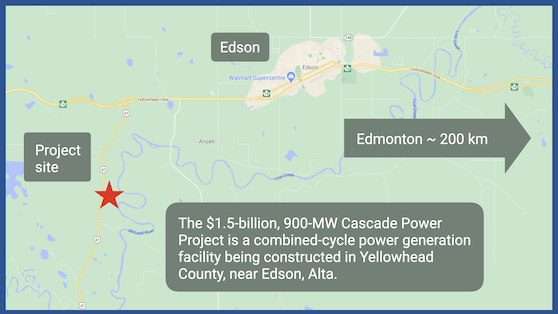 Cascade is a 900-MW combined-cycle, natural gas-fired generating facility to be located near Edson. Siemens Energy will provide two single-shaft SCC6-8000H powertrains, as well as maintenance support under a long-term service agreement.

The project is strategically situated, says Kineticor, because of proximity to significant gas production, as well as the NGTL System and high-voltage transmission lines. Cascade is expected to supply over 8% of the province’s average demand.

Kineticor says the project will benefit the local community with over 3 million work hours of labour required for construction, as well as 25 long-term jobs during operation.

In other project news, the Alberta Indigenous Opportunities Corp. (AIOC) announced it has provided a loan guarantee to a consortium of six Alberta First Nations to enable their participation in the Cascade Power Project.

“Securing this deal is transformational for the First Nations involved, and creates the national blueprint for Indigenous communities to acquire ownership in major energy and infrastructure projects,” said Chief Tony Alexis of the Alexis Nakota Sioux.

“This is a momentous deal and I’m proud for this to be the first project approved by the AIOC,” said Alicia DuBois, CEO, AIOC. “I want to especially thank the Alexis Nakota Sioux Nation and their team at Backwoods for their hard work to design and structure this meaningful transaction that will bring lasting prosperity to Indigenous communities in Alberta.”

Established in November 2019, AIOC is a provincial Crown corporation that guarantees loans to Indigenous groups to facilitate investment in natural resource projects and related infrastructure.