“Focus on the outcome, not the technology. Don’t deploy technology for technology’s sake.” 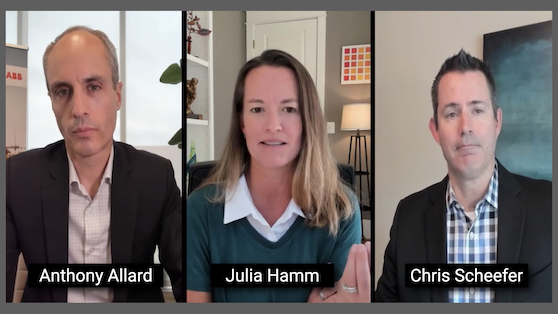 Screen shot from the session “Pave the way to a clean-energy future with digitalization and transmission investments”, Hitachi Social Innovation Forum 2021.

May 28, 2021 – “We are at a historical point,” when it comes to electrification and “green” grid expansion, according to Anthony Allard, head of Hitachi ABB Power Grids, North America.

Allard was a speaker at at the Hitachi Social Innovation Forum 2021, for the session “Pave the way to a clean-energy future with digitalization and transmission investments”. He was joined by fellow panelist Chris Scheefer, SVP, Industry Practice, Hitachi Vantara, and moderator Julia Hamm, president & CEO, Smart Electric Power Alliance.

While this panel focused on the U.S. landscape, the discussion easily lends itself Canada’s own grid discussions and aspirations.

Allard emphasized the importance of accelerating the deployment of renewables and electrifying more of our economy. But that comes with a caveat: electrifying more aspects of our economy will require expanding overall grid capacity with new physical infrastructure, to be sure, but also increasing the grid’s overall intelligence.

And we get there with increased digitalization.

Everyone is going green, Scheefer added, noting that facilities such as arenas, buildings, stadiums, etc., are becoming their own microgrids, further emphasizing the importance of digitalization to make all of these disparate entities work with one another while smoothing out the intermittency of renewables.

Allard seconded that opinion, reminding attendees that an electric utility’s raison d’être is to deliver electricity where it is needed, when it is needed. Otherwise, it is wasted. Grid intelligence, brought about via digitalization and working alongside energy storage is the only viable way to make tomorrow’s electricity system work—particularly because you have renewables in the mix.

Devices and technologies that set that stage for intelligence (e.g. IoT and edge devices, digital twins, the cloud) create vast amounts of data, which is why data—along with data analytics—is key to the energy system of tomorrow, Scheefer said.

That said, “Focus on the outcome, not the technology,” he advised. “Don’t deploy technology for technology’s sake.”

With all the technologies and systems coming online—like distributed energy resources, offshore wind farms, energy storage, and more—Scheefer suggests keeping track of them all is “beyond human capacity”. He suggests AI and AI-powered solutions are vital to tomorrow’s grid—for planning, resiliency, and more.

Allard pointed to policy as being the biggest hurdle. “In the U.S., we don’t have a national energy plan,” he said.

Understandably, this can hamper progress on “big-picture” nationwide projects. (In the Canadian context, pipelines come to mind.)

Scheefer, meantime, highlighted the funding constraints that utilities face when trying to make all of these “things” happen; that is, achieve carbon targets while being profitable.

He also touched on skills gaps that need to be filled to achieve the green grid of tomorrow: “We need data scientists”. In fact, Scheefer suggested “an ecosystem” of players is needed to bring about a successful green grid, including manufacturers of utility products, 5G telcos, IoT experts, and more.

In her position with SEPA, Hamm observed that utilities that were making progress toward a greener grid are, indeed, those who develop strategic partnerships.

On a less grand scale, this discussion—especially the part about partnerships—reminded me of our Smart Buildings panel discussion, in which all three panelists stressed the need for a collaborative approach. “You’re like one team building a system,” one of them said.

As we continue the plunge into possibly unfamiliar technological waters, consider the advice of these professionals—that partnerships, and the pooled the knowledge they represent—will help drive success in your endeavours.