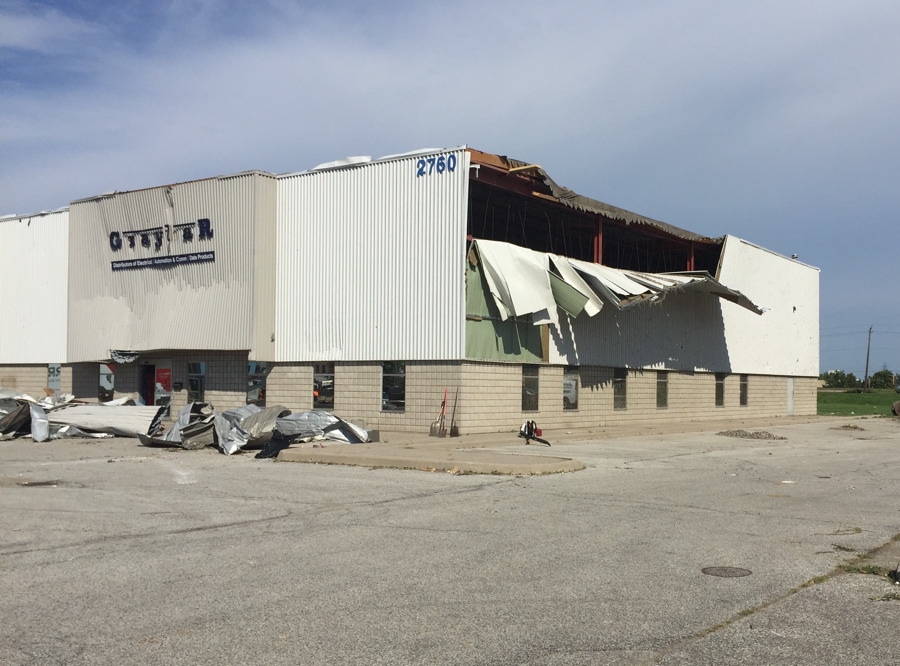 June 21, 2017* – It’s a birthday Glen Miller won’t soon forget. Probably never. Glen is the branch manager of Graybar Canada’s Windsor location at 2760 Deziel Drive and, on the evening of Wednesday, August 24—while he was out with his wife, son and daughter-in-law celebrating his 51st birthday—he got a call from one of his neighbours, Rose City Electric, who plainly told him: There’s a hole in the side of your building.

“While we were having dinner in the restaurant, the TV was showing a tornado warning in Detroit, across the river,” Glen recalls. “We had just finished eating, and were thinking about ordering a bottle of wine, when my phone started ringing.”

Glen didn’t recognize the number from the first call; based on the area code, he thought it was probably just a telemarketer, so he ignored it. The second call came from one of his suppliers, Troy Life & Fire Safety, whose building is just a few doors down from Glen’s, but he ignored that call, too, because it was after hours and, hey, they were still eating.

When the supplier phoned again, Glen figured it must be important. He took the call, and learned some of Troy Life & Fire Safety’s windows were broken. They asked Glen whether he had also heard from his security company. Glen didn’t think so, but then he remembered the call he had discounted as a telemarketer.

What was going on here? Was there a rash of break-ins?

After checking his voice mail, Glen confirmed the security company had, indeed, phoned to alert him to an alarm at the Deziel premises.

Then came the call from Rose City’s owner about the hole in Glen’s building.

And while this was unfolding, Glen didn’t take it seriously. He admits with a chuckle, “I thought it was a big joke. I thought people were making this stuff up because it was my birthday!”

Not in Kansas any more
But it was no joke. While dining with his family, Glen’s branch was rocked by an F2 tornado (wind speeds approx. 113-157 mph). It suffered severe structural damage, including a collapsed block wall to which a gas main was attached. Luckily, the last employee had left work about an hour earlier.

After chatting with John Hodges, his manager of customer service, Glen was off to Deziel to assess the damage.

“We moved into that branch in January 2001,” explains Glen. Home to 15 employees, the branch comprises 16,000 sf, about 12,000 of which are warehouse, with the remainder split among counter and offices.

“As I got closer to the building, I didn’t see any damage anywhere,” Glen says. He noticed the traffic lights were out here and there, but it wasn’t until he got right into the immediate vicinity—where he saw people being evacuated from the area—that he began to understand the gravity of the situation.

Glen arrived onsite around 8:30 pm, preceded by John, but neither were allowed near the building that evening. (John arrived onsite about 10 minutes prior to Glen, and emailed him some pictures. He was also among the people being evacuated.)

“Between John and myself, we called all the staff and told them not to bother coming into work Thursday, because we didn’t have anywhere for them to work,” says Glen, who admits, at that point, he had no idea what was going to happen.

Disaster recovery 101
At that moment, when Glen learned the premises would have to be evacuated, the company shifted into crisis mode.

“Our customs broker, Russell A. Farrow, volunteered two trucks to load up all our stuff and stage it in a warehouse for us until we could find a suitable location to work out of,” says Glen.

They went through the entire Deziel building, and inventoried everything as it was loaded onto trucks. About 20-30% of the product was damaged, but the rest could be saved. With that settled, Glen started looking for property.

“I knew about this building we’re in now—the old FedEx building, just around the corner—and I knew it has been sitting empty, so I suggested we look at it,” says Glen, so the company’s senior management came to Windsor and arranged a short-term lease for 3505 Rhodes Drive. “Then Russell A. Farrow started bringing all the material back to us at this location.”

“We did the whole move with our own staff,” Glen says proudly. “We didn’t hire any outside help, for the most part. The project team worked from home, but the balance of the staff was with me.”

Glen’s staff worked pretty much every day, including weekends (save one) from 7 am to 7 pm to empty the Deziel location and, eventually, move everything into the temporary Rhodes branch.

Meantime, Graybar Canada branches from Kitchener and Niagara Falls to Hamilton and Markham pitched in to take orders, follow through on deliveries, and so on.

“Basically, two and-a-half weeks after the tornado hit us, we were up and running in this building, complete with phones, internet, everything.”

Help from within, and offers from without
While Graybar Canada—along with its partners—seemed to have its disaster response and recovery well in hand, the branch nonetheless received offers of support from its competitors.

And with so many people in the company who helped, Glen says he is hard-pressed to single out all of them. He tips his hat to Graybar Canada’s IT department, who refused to accept Bell Canada’s three-week timeline to hook up the new location on Rhodes.

“And my executive VP and general manager, senior VP Sales, marketing VP, and VP Central Region, too, for coming in and negotiating a lease for this temporary building… they, along with the senior management, were all just fantastic.”

The keys to such an amazing disaster response, then, are having a strong company behind you, and the right people by your side.

“The whole process [of disaster recovery] wowed me,” Glen admits. “Our staff worked tirelessly to get those trucks loaded and unloaded, and put the product on the shelves and get us up and running… they cared about the branch like it was their home. My entire staff has to be commended for their efforts.”

Since our initial discussion, the building on Deziel has made great progress. It is now mid-December, and Glen reports the roof is complete, and the rooftop units are installed and connected. The main service is built, with the mast going up shortly. The office and counter rebuild are coming along nicely, and the building should be weathertight before Christmas.

“If we hadn’t had such a caring company behind us—with all the right people in place to make important things happen for us—there’s no way we could have been up and running again in two and-a-half weeks,” says Glen. Ω

At 7:24 pm, an F2 tornado (wind speeds approx. 113-157 mph) strikes Graybar Canada’s Windsor branch at 2760 Deziel Drive. Luckily, the last employee had left work about an hour earlier. Branch suffers severe structural damage, including a collapsed block wall to which a gas main was attached. Staff are prevented from accessing the building until engineers deem it safe to enter.

Thursday, August 25
Graybar Canada communicates the situation to its employees, customers and vendors. A few staff are able to access the site and gather a few things.

Friday, August 26
Staff are allowed back onsite. They take inventory and load skids of product. They are to vacate immediately should the wind pick up.

* This article was originally published December 14, 2016. It also appears in the Spring 2017 edition of Distribution & Supply, as well as Electrical Business Magazine.