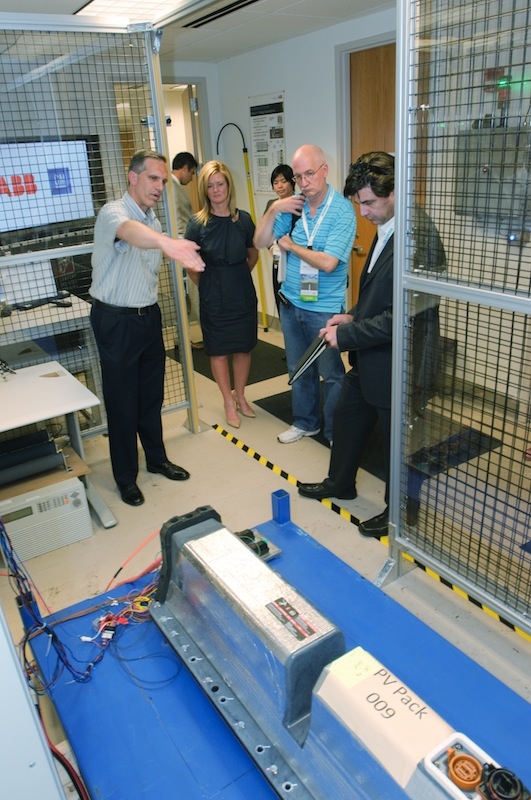 (UPDATED November 16, 2012) November 15, 2012 – General Motors and ABB boast they showed “the next stage in battery reuse”: the repackaging of five used Chevrolet Volt batteries into a modular unit capable of providing two hours of electricity needed by three to five average Canadian homes. The modular unit was designed and built by engineers at GM Canada’s Canadian Engineering Centre in Oshawa, Ont.

The uninterruptable power supply (UPS) and grid power balancing system was demonstrated during GM’s Electrification Experience. The prototype unit provided 25kW of power and 50kWh of energy to power all the support lighting and A/V equipment in an off-grid structure used for the event.

“GM’s battery development extends throughout the entire life of the battery, including secondary use,” said Pablo Valencia, GM senior manager of battery lifecycle management. “In many cases, when an EV battery has reached the end of its life in an automotive application, only 30% or less of its life has been used. This leaves a tremendous amount of life that can be applied to other applications like powering a structure before the battery is recycled.”

During the demonstration, the energy storage system was run in a “remote power back-up” mode where 100% of the power for the facility came from Volt batteries through ABB’s Energy Storage Inverter system. A similar application could one day be used to power a group of homes or small commercial buildings during a power outage, allow for storage of power during inexpensive periods for use during expensive peak demand, or help make up for gaps in solar, wind or other renewable power generation, say ABB and GM.

These functions, along with frequency regulation on electric distribution systems, could someday be used by utilities to reduce cost to customers and improve the quality of power delivery, they continue. These applications are referred to as community energy storage to distinguish them from substation-size energy storage projects.

“We showed today how fast this research concept is turning into reality,” said Allen Burchett, ABB’s senior vice president for Business Development in North America. “The ABB-GM Volt battery system is the world’s first use of car batteries as possible back-up power for homes and other commercial uses. We will be installing it on the grid soon to complete the technical evaluation, and this will tell us all what smart grid applications are possible, like back-up power, reducing energy cost, strengthening utilities’ distribution systems and storing surplus renewable energy.”