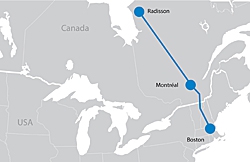 This interconnection was the world’s “first multi-terminal link”, ABB says, and since entering service in the early 1990s, it has provided Montreal and Boston with hydro. With a total capacity of 2000MW, the link can provide enough electricity for 3.8 million people, ABB adds, based on average U.S. household consumption.

As part of this latest upgrade, ABB replaced the link’s hardware and software with its MACH control and protection system. According to the company, this “ensures a continued, highly controllable power supply and enables advanced smart-grid studies for further grid optimization.”

The MACH system, which acts like the brain of the HVDC link, offers integration capability to handle control and protection functions, ABB says, and is designed to run around the clock for decades. It also incorporates fault registration and remote control functions.

The company says there are over 1100 such systems throughout the world.