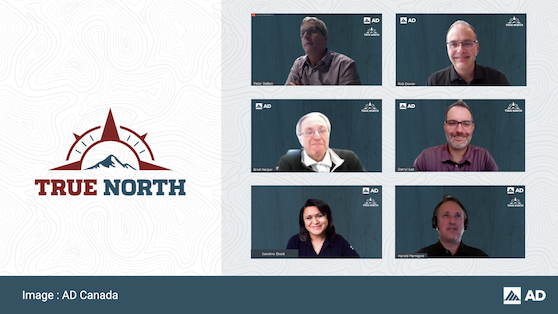 November 3, 2021 – AD’s Electrical-Canada Division welcomed members and supplier partners (virtually) for its 2021 North American Meeting last week, with the goal of “facilitating strategic conversations that help the division devise new ways to stay ahead of the competition”.

Rob Dewar, president of AD Canada, kicked off this year’s meeting (themed “True North”) with member and supplier business updates, emphasizing the strides the division has made in 2021 despite continued economic and supply chain uncertainty.

“We are incredibly proud to share that in 2021—the year that tested many industries with various economic challenges along the way—AD Electrical-Canada came out incredibly strong, with a 20%-plus increase in divisional purchases with suppliers compared to 2020,” Dewar said.

“Where other businesses in the industry have experienced hardship coupled with shortages as a ripple effect of the pandemic, in true AD form, we have both defied those challenges and surpassed our own goals and expectations,” noted Peter Dalton, president of Daltco Electric & Supply Ltd., and AD Electrical-Canada Division board chair.

“We look forward to the day in the near future when we can reunite and celebrate our triumphs in person,” Dalton added.

The meeting also saw the launch of some new divisional initiatives, including a supplier star rating system, which will be based on empirically measurable criteria that mirror a supplier’s efforts in areas such as rebate programs, market planning, meeting participation, etc.

A new initiative aimed at empowering women across industries was also discussed at the event.

“The Women in Industry initiative—a group open to anyone from AD’s Electrical-Canada, Industrial & Safety-Canada and Plumbing & Heating-Canada divisions looking to make an impact in this area—will focus on creating mentoring opportunities, emphasizing professional development and ensuring women have a seat at the table,” said AD Canada’s Caroline Ebeid.

Both women and men are encouraged and welcome to join.

The event’s one-on-one appointments between members and suppliers provided a platform for companies to converse on best practices and brainstorm new ways to grow the independent channel, Baran added.

“The timing couldn’t be better to meet with each supplier to review and ensure progress on the execution of annual plans with our key vendors for the last quarter of the year,” said Heather Gerrie, co-president and CEO of Gerrie Electric. “This year, in particular, it has been critical that we get important updates on any supply chain issues and upcoming price increases so we can better manage our business during this disruption.”

Bernie Backman, co-president of Franklin Empire, noted the virtual format does have certain advantages, in that you can have more people participate in meetings where you plan future strategies.

Finally, plans are afoot to gather in-person next year at the AD Electrical-Canada’s 2022 Spring Network Meeting, scheduled for April 13-15 at the Westin Bayshore in Vancouver.

AD is a member-owned, North American marketing/buying group for construction and industrial supplies. Its 850-plus independent member owners span 13 divisions (including electrical) in Canada, the United States and Mexico.

— With files from Haly Baran