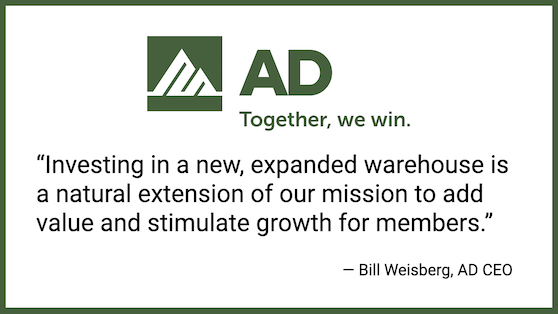 The original warehouse location came into AD fold as a part of its merger with IDI in 2019, and was available exclusively for use by members in the Industrial & Safety Division–Canada. The new facility, however, is nearly double in size, broadening the scope of AD’s warehousing capabilities for all AD divisions in Canada.

Located in the Greater Toronto Area, the new facility provides Canada-based AD members with redistribution of over 75 product lines of industrial, safety and janitorial items, including private-label brand Tuff Grade.

“AD is grateful to have had a presence in the electrical business in Canada since the early 90s,” noted AD CEO Bill Weisberg. “Over the years, we’ve grown our membership there to over 160 independents in the electrical, industrial and safety, and plumbing & heating industries […] Investing in a new, expanded warehouse is a natural extension of our mission to add value and stimulate growth for members.”

The warehouse affords AD’s members the convenience of ordering products from multiple vendors, all on one invoice, and supplier partners the ability to consolidate operations and reduce freight costs.