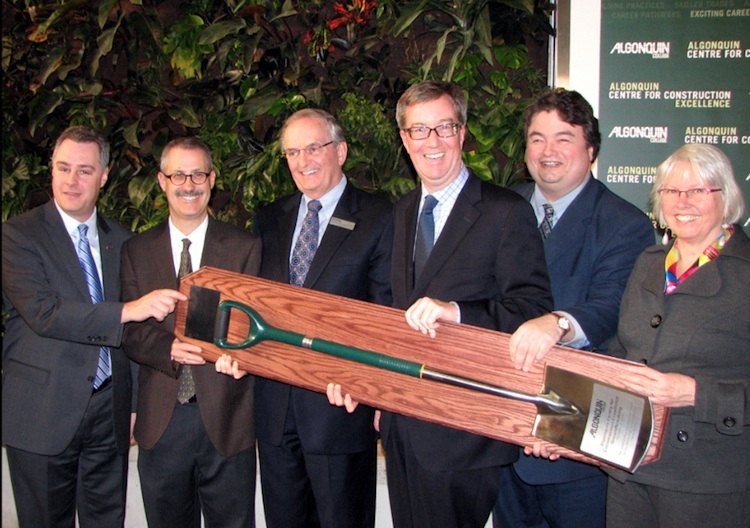 January 3, 2012 – Interested in a career in skilled trades, sustainable construction, design, and engineering? While the Algonquin Centre for Construction Excellence (ACCE) at Algonquin College in Ottawa, Ont., has been open since September 2011, it just recently celebrated its grand opening several weeks ago.

The new facility offers 190,000 sf. of space that allows for all construction and related design programs to be housed in a single location. Programs offered at the Centre include:

The $79-million dollar project received a Government of Canada investment of $35 million through the Knowledge Infrastructure Program (KIP) and $35 million from the Ontario government through the 2008 Budget’s Strategic Skills Training Investment Program. The City of Ottawa provided the land located on Woodroffe Avenue and funding for a pedestrian link.

“On behalf of the entire Algonquin College community, I would like to thank all of the levels of government, as well as our industry partners, who came to the table with their advocacy, advice and funding which was necessary to bring this building to fruition,” said Gillett.

“This investment in the Algonquin Centre for Construction Excellence will help us to continue to build on our commitment to train the workforce of tomorrow and provides our students with new ways to learn through living laboratories, interdisciplinary study, and sustainability built directly into the curriculum,” he continued.

The Centre features a “living laboratory” approach, which was adopted to augment student learning and applied research, said school officials. Several building and environmental systems have been left exposed so students and visitors can see firsthand what goes into making the facility work, such as:

“This building represents the very best Algonquin has to offer and will give a generation of skilled trades people the tools they need to succeed,” added Baird.

The Centre is currently seeking Leadership in Energy and Environmental Design (LEED) Platinum‐certification.