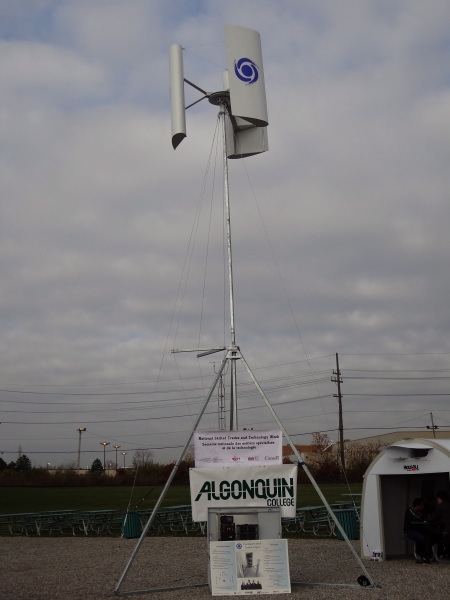 November 3, 2011 – Do you remember wondering, when you were back in school, if what you were learning in class really mattered after graduation? Students enrolled in Algonquin College’s Mechanical Engineering Technologist and Electrical Engineering Technologist programs don’t seem to be having that problem (hopefully) – thanks to the mandatory co-op work projects built into the third year of studies. One of last year’s projects—a 28-ft model wind turbine—was also a highlight at the November 1 launch of National Skilled Trades and Technology Week 2011 in Ottawa.

The week, hosted by Skills/Compétences Canada (S/CC) and Canadian Council of Technicians and Technologists, rolls out different activities across Canada to showcase new opportunities and careers in skilled trades to high school students. This year’s theme is energy, which according to Skills Canada, underscores the important role of building sustainable energy workforce to meet the needs of industry and future generations.

In 2010, four Algonquin students were partnered with EdeyFX, a local fabrication business, to develop this version 1 model wind turbine to bring electrical power to any remote location (pictured above). According to Mark Edey, president of EdeyFX, the model is designed to fit well in a shipping container and can be assembled in 30 minutes with 3-4 people. It also doesn’t require any heavy equipment or power tools, he added.

Now armed with a new team of seven students, this year’s goal is to build an improved version that can be assembled faster and with less people, said Edey.

SCROLL DOWN to see photos of the EdeyFX and the new team of Algonquin students. (Photos A. Dalton)

Completion of the revised model is slatted for the college’s Annual Applied Research Day on April 13, 2012, which showcases all partnered projects between Algonquin students and local businesses.