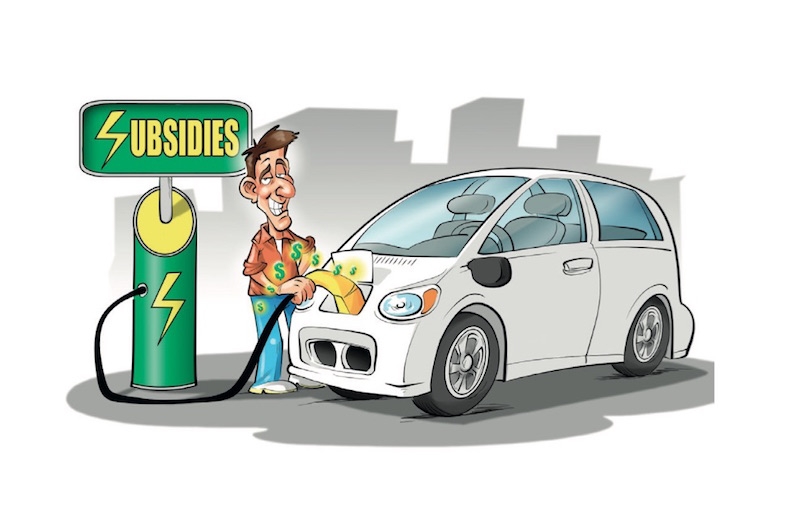 June 22, 2017 – While Quebec and Ontario subsidize the purchase of electric vehicles, a new Economic Note from the Montreal Economic Institute concludes this practice is the least-efficient and most-expensive way of reducing greenhouse gas (GHG) emissions.

“It’s just a waste,” says MEI’s Germain Belzile, co-author. “Not only do these programs cost taxpayers a fortune, but they also have little effect on GHG emissions.”

Were Quebec to achieve its goal of having 1 million EVs on its roads by 2030 (there are currently fewer than 6000, says MEI), this would only avoid 3.6% of the province’s current level of emissions. Same thing in Ontario, adds MEI; if aimed for proportionally the same target, the province would eliminate just 2.4% of its current emissions.

Quebec provides a subsidy of $8000 for the purchase of a new electric or rechargeable hybrid vehicle, and Ontario subsidizes up to $14,000. These subsidies cost taxpayers $523 per tonne of GHGs not emitted in Ontario, and $288 per tonne in Quebec.

In comparison, the same goal of reducing GHGs costs around $18 through the existing carbon market, which groups together California and Quebec and, soon, Ontario. And it will cost between $10 and $50 per tonne of GHGs avoided with the federal government’s impending carbon tax.

In subsidizing the purchase of electric vehicles, the Ontario government ends up spending 29X the carbon market price for each tonne of GHGs eliminated, and 52X the rate of the upcoming federal tax when it comes into effect next year. For Quebec, the figures are 16X and 29X, the authors conclude.

“The real costs are probably even higher, since half of buyers of EVs would make their purchases even without the subsidy,” explains Mark Milke, co-author of the publication.

“The Quebec and Ontario governments have to face facts. Subsidies for the purchase of electric vehicles not only have little effect on GHG emissions, but they also cost taxpayers a lot of money. Common sense, both economically and ecologically speaking, argues in favour of reducing these subsidies, and even eliminating them,” concludes Mark Milke.

Download the Economic Note “Are electric vehicle subsidies efficient?” below.