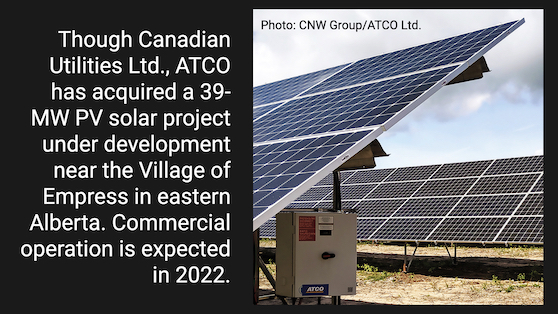 ATCO acquired the development rights to the project from a third-party developer through Canadian Utilities Ltd. Financial terms were not disclosed.

“This kind of energy project is a central pillar of ATCO’s strategy,” said ATCO’s Bob Myles. “A strategy anchored by our commitment to sustainability through the production of cleaner fuels, renewable electricity, energy efficiency and critical energy infrastructure.”

Located south of the village of Empress near the Alberta-Saskatchewan border, the project has received its major permits, says ATCO, with project execution underway and commercial operations expected in 2022.

The project will employ about 85,000 bifacial solar panels affixed to a single-axis tracking system, and is expected to provide enough electricity to power more than 11,000 homes annually.

Electricity from the Empress Solar Project will be sold into the Alberta power market. ATCO says it is currently negotiating with potential off-takers to contract the facility’s output.