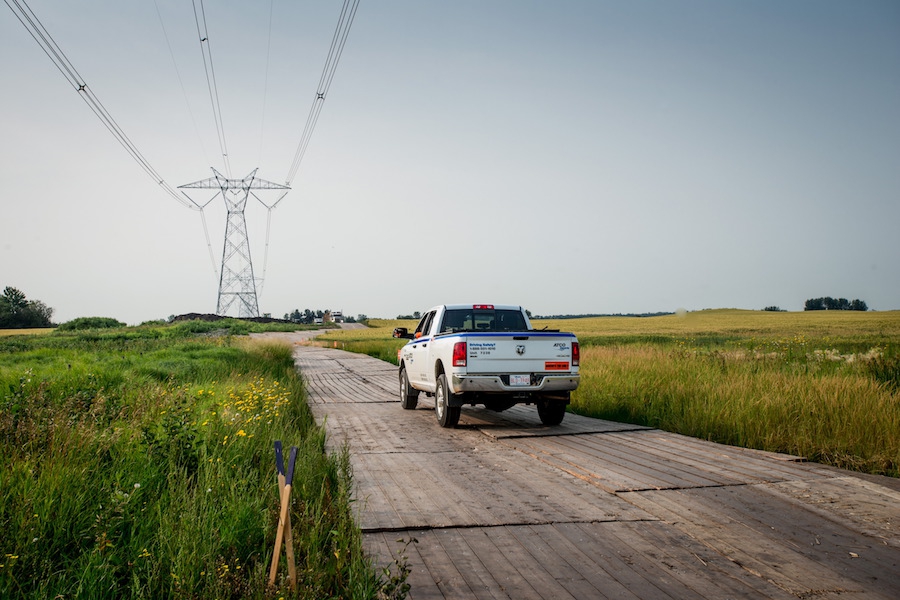 December 16, 2015* – “Today we celebrate the completion of a generational investment for Albertans by an Alberta-grown company,” said Sett Policicchio, president of ATCO Electric, speaking of the completion of what the utility calls “the longest transmission line in Alberta’s history”—the Eastern Alberta Transmission Line (EATL).

ATCO says “Albertans will save thanks to the efficiency of the new direct current transmission line”. By reducing the amount of electricity lost during transmission, EATL reduces the amount of power generation required, saving money as well as tons of future greenhouse gas emissions.

The nearly 500-km, 500kV line connects Brooks in the southeast to the Gibbons-Redwater area northeast of Edmonton. The project took three years to complete and, in total, ATCO obtained more than 6000 environmental review permits, crossing permits and other permissions while conducting 14 open houses and hosting 8300 consultations with Albertans.

The line also provides new infrastructure for moving renewable energy (e.g. wind and solar) from where it is produced, to where it is needed. And, apparently, the line is already hard at work: immediately following final testing and commissioning, ATCO says EATL was able to assist the Alberta Electric Service Operator (AESO) in alleviating grid congestion by moving 300MW of electricity from southern Alberta to the capital region.

“I want to thank all of the residents who live near the line for their cooperation and patience during the consultation and construction of this project,” added Policicchio. “This was the largest undertaking in our company’s history and we could not have achieved this success without the cooperation of Albertans.”

“This transmission line will reinforce our electrical grid for decades,” said Policicchio.