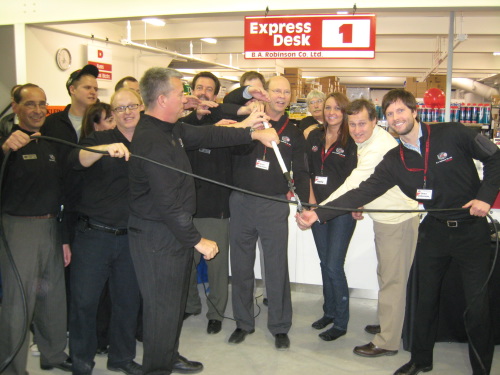 Back in November 2008, B.A. Robinson Co. Ltd. celebrated the grand opening of its new electrical HQ/branch in Winnipeg with over 220 guests from the electrical and lighting trades. The evening featured a trade show where over 25 vendors displayed the latest in goods for electrical contractors, food and drink were enjoyed by all, and numerous door prizes were awarded to lucky attendees.

The
evening’s highlight was the official, not ribbon-cutting, but
wire-cutting, followed by the awarding of two grand prizes. John Nunes
of ABCO Supply walked away with a trip for two to Arizona, including
airfare (sponsored by General Electric), while Frank Mutcher of McCaine
Electric won the use of a Pontiac Solstice convertible for three months
(sponsored by Schneider Electric).

The
building itself is unique in that it was built in the place of an
existing structure that was stripped down to its frame and rebuilt to
exceed today’s standards. The main warehouse floor was rebuilt to be
spacious, bright and inviting, allowing customers to easily shop for
goods. An upper level was added to house management and staff offices.

In an
effort to be as energy-efficient as possible, the warehouse is heated
by hundreds of metres of pipe within the floor that carry heated water
supplied by two high-efficiency boilers. The warehouse also only
employs high-efficiency lighting. The office area is heated via an air
source heat pump system.

B.A.
Robinson is a fully diversified distributor of electrical, lighting and
plumbing products to the construction industry and retail home
improvement market in Western Canada. Founded in 1936, the company now
operates from 24 locations in British Columbia, Alberta, Saskatchewan,
Manitoba and Northwestern Ontario. Congratulations!