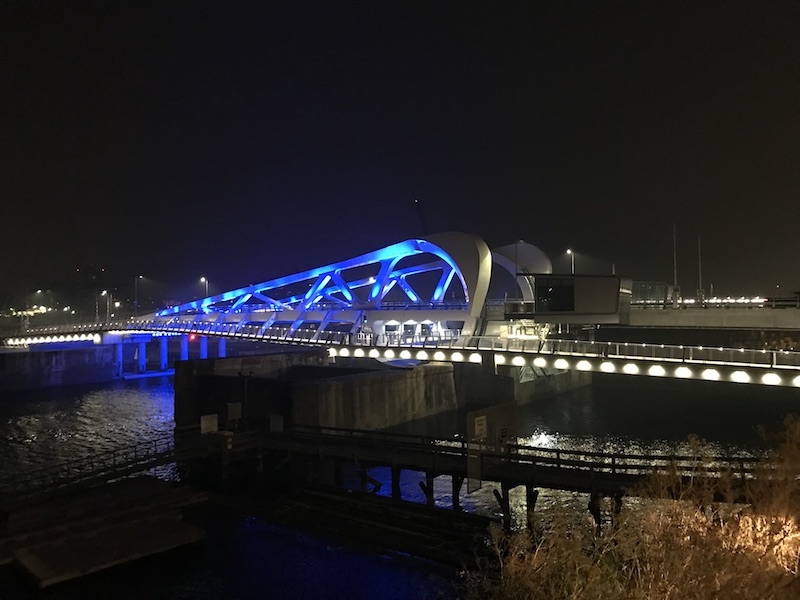 CEA is the first and only program of its kind to recognize electrical professionals for excellence in their work across Canada, with conspicuous attention paid to the health and safety of electrical workers. We congratulate the winners and thank everyone who took the time to participate this year!

Johnson Street Bridge
This year’s winner in the Special category (over $1 million) was submitted by Morgan Gibson-Wright, co-ordinator for Western Pacific Enterprises (WPE), which served as electrical contractor for the project.

The Johnson Street Bridge (JSB) project was a major undertaking to replace the existing blue bridge that spanned the narrows of Victoria’s Inner Harbour. A replacement was necessary because the existing bridge was not built to current seismic codes and was reaching the end of its useful life.

Built from May 2013 to March 2018, the new bridge includes three vehicle lanes, on-road bike lanes, multi-use trails and a dedicated pedestrian path. Further, at 46 m long, it boasts the largest span of any single-leaf bascule bridge in Canada.

WPE’s work for the bridge was competitively bid and had to meet a variety of expectations with regard to project outcomes.

“The original electrical contract was valued at $3.2 million,” explains Gibson-Wright. “The final value with $700,000 in change orders was $3.9 million. The project team faced challenges during construction due to barge access and material logistics. There were also challenges with public interface, vehicles, bicycles and pedestrians, as well as co-ordinating with a consultant situated in New York.”

Also, an occupational health and safety (OH&S) program was implemented on the project and audited by WPE’s corporate safety officer throughout the five-year duration. At its peak, manpower included six workers for electrical alone. Job hazard analyses and site-specific work procedures were prepared and implemented regularly for all tasks executed over the water. And compared to its predecessor, the bridge is equipped with improved safety features and accessibility. It is designed to serve its community for the next 100 years.

“Jim is making a big impact on electrical safety in Canada,” Becker says. “He has been extremely dedicated over the last eight years to putting the CSA Z462 workplace electrical safety standard into play, ensuring arc flash and shock risk assessments are understood and applied correctly.”

Pollard started down this path 13 years ago. He was working for a distributor of personal protective equipment (PPE) for general safety purposes when a client company approached him for specific recommendations after an arc flash incident had badly burned some of its employees.

“Within a year, I was thrust into arc flash safety,” Pollard recounts. “The CSA Z462 committee was formed shortly after that incident, taking direction from a 2004 U.S. standard. They published the Canadian standard in 2008 and invited me to join the committe in 2009. I was quickly humbled by the challenging process of standards development!”

Specifically, he provided guidance to help readers of the standard apply it to their workplaces. His clarifications were added starting with the 2012 edition.

In the meantime, Pollard had started his own company, Unlimited PPE, in 2008, serving as an agent for various vendors of products and services.

“I chose that name because, while I knew I would focus on electrical safety with regard to arc flash PPE, I didn’t want to limit myself,” he says.

And indeed he did not. Rather than only focus on PPE as what he calls a worker’s “last layer of defence” against electrical hazards, he provided broader training to help companies understand their full obligations to comply with CSA Z462 and how to move forward.

“Jim has devoted his professional career to electrical safety,” says Becker. “He educates his clients first and sells to them second. He goes out of his way and spends countless personal hours to ensure he maintains his subject matter expertise and shares it with the industry freely. He even recently presented a four-hour tutorial in Australia, where the industry is now reviewing arc flash and shock hazard management.”

“The rest of the world is still catching up,” Pollard says. “Some countries have standards that are similar to ours, but not as well-defined. With 90% of arc flashes, resulting from human error, there’s a lot of work still to do.”

He also sets his sights well beyond electrical workers.

This article originally appeared in the December 2018 issue of Electrical Business Magazine.