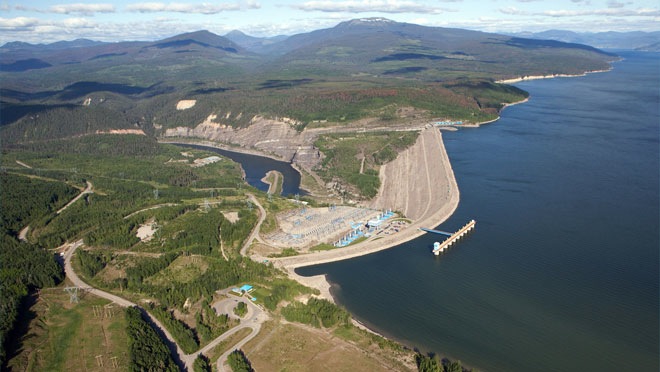 June 10, 2014 – BC Hydro reports the GM Shrum Generating Station (GMS)—built near Hudson’s Hope in 1968 (providing around 23% of the total electricity BC Hydro generates)—will be getting new turbines to add enough generating power for 15,000 homes.

“Although they were considered state-of-the-art when they were installed, today the 45-year-old turbines just aren’t what they used to be,” notes BC Hydro.

The utility is replacing five turbines at GM Shrum with modern generating units, which will add 177GWh of electricity annually without requiring any additional water.

Installing the new turbines is just one of 19 projects that will upgrade GM Shrum and the W.A.C. Bennett Dam. The utility reports projects like these are designed to ensure that its largest facilities—like those on the Peace River—are ready to meet the province’s highest demands for power, such as the winter electricity peak.

Even with its planned upgrades, BC Hydro highlights the need to look to new sources of generation to ensure that future British Columbians have access “to the same reliable clean hydroelectricity that has powered British Columbia since the 1960s”. Even with its conservation target of reducing anticipated demand growth by 66% through conservation by 2020, the BC Hydro insists the province will require more power.

As such, BC Hydro has undergone a long-term Integrated Resource Plan to determine the best way to meet future electricity needs. To meet anticipated electricity demand, the plan recommends building Site C—a proposed third dam and hydroelectric generating station on the Peace.

Subject to approvals but planned to be in service by 2025, the Site C Clean Energy project would be a source of clean, renewable and cost-effective electricity for more than 100 years, explains the utility. Site C would power the equivalent of around 450,000 homes per year.

PHOTO: GM Shrum Generating Station at the W.A.C. Bennett Dam was built in 1968. The Peace River facility, which generates 23% of all of BC Hydro’s power, requires upgrades, including the replacement of five 45-year-old turbines. Photo © BC Hydro.