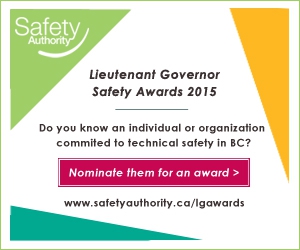 July 30, 2015 –  BC Safety Authority (BCSA) has opened the call for nominations for the Lieutenant Governor Safety Awards 2015, which include a category for Excellence in Electrical Safety.

Presented in honour of Judith Guichon, Lieutenant Governor of British Columbia, the awards recognize individuals and organizations for their contribution to technical safety.

“Through these awards, we are celebrating the people who inspire safety leadership in B.C. industries, homes and communities”, said Catherine Roome, BCSA president & CEO.

The deadline for nominations is Sept. 17. The awards ceremony will be held on Nov. 23 at the River Rock Casino Resort in Richmond, B.C.