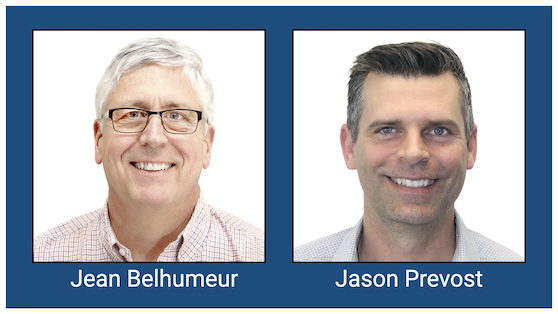 October 2, 2020 – Jean Belhumeur, president and COO of Leviton Canada, will retire at the end of this year, and Jason Prevost will take his place effective January 1, 2021.

“On behalf of the Leviton family and organization, I would like to recognize Jean’s significant contributions to Leviton Canada. His strong work ethic and leadership have fuelled our growth in Canada,” said Daryoush Larizadeh, Leviton’s president and COO. “We have been very fortunate to have Jean lead our Canadian team, and thank him for his commitment to ensuring a smooth transition. We wish him well in his retirement.”

Belhumeur has held several roles throughout his 26-year involvement with Leviton Canada. His career at Leviton began in 1994 when he assumed the position of controller. He was later appointed vice-president, Finance & Administration, then accepted the role of president in 1998.

He also served as chair of Electro-Federation Canada in 2011.

Jason Prevost joined Leviton in April 2019 as vice-president, Distribution Sales. Previously, he worked at Standard Products for 15 years, where his final position was that of VP marketing and executive vice-president.

He was also one of the founders of Electrofed’s Young Professional Network, and YPN chair for several years.