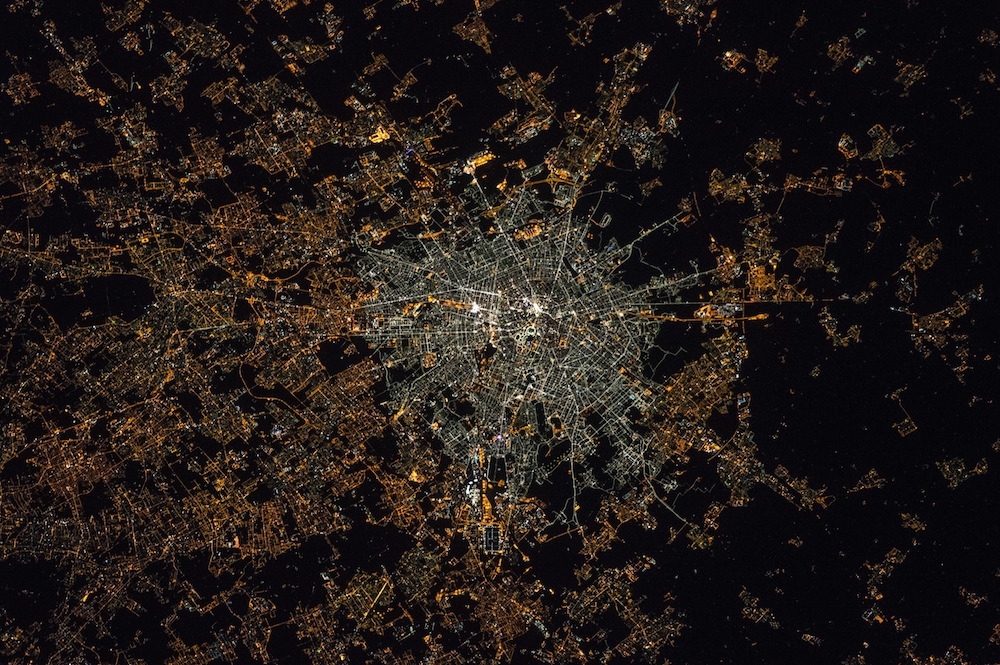 August 13, 2015 – Scientists are tapping into photographs taken by astronauts aboard the International Space Station (ISS) to measure the amount of light pollution worldwide and, not surprisingly, their results confirm that the diffuse glow that brightens the night skies in and around cities is scattered light from streetlights and buildings.

In a new study, scientists from Canada’s Cégep de Sherbrooke and Spain’s Universidad Complutense de Madrid—together with members of the public—have worked on a project called Cities at Night, whose aim is to produce a global colour map of the Earth at night from pictures taken by ISS astronauts using a standard digital camera.

Starting in July 2014, the project required the cataloguing of over 130,000 images (the ISS’s entire high-resolution archive) and geo-referencing them to places on a map. The images were also calibrated using the stars in the background sky over the ISS, as well as ground-based measurements of the night sky brightness.

A diffuse light present around cities, in addition to the familiar bright lights from streets and factories, was previously detected by the Defense Meteorological Satellite Program, but its nature remained unknown; the satellite’s low-resolution cameras could not distinguish it from other instrumental factors, note researchers. However, the high-resolution images captured by the astronauts—in addition to an extensive sky brightness survey conducted around Madrid—have now allowed scientists to observe the direct relationship between the diffuse light observed and light pollution from artificial lights.

Using the ISS astronaut images, as well as data from the Defense Meteorological Satellite Program and the Suomi National Polar-orbiting Partnership Satellite, the researchers also discovered that European countries and cities that have a higher public debt also have a higher energy consumption of streetlighting per inhabitant. The total cost of the energy consumption for streetlights is estimated by the study to be 6300 million euros/year in the European Union. The different ways of calculating streetlight energy costs across Europe previously made such an estimate impossible, researchers say.

Studying lighting technology from orbit is of even greater importance now than before, insist researchers, due to massive transitions to LED technology. LED streetlights make light pollution such as sky glow significantly worse, researchers find, as they emit more blue and green light than the high-pressure sodium (HPS) lights they typically replace.

PHOTO: This image of Milan was acquired after the transition to LED technology in the centre. The illumination levels appear to be similar or even brighter in the centre than the suburbs, and the amount of blue light is now much higher, suggesting a greater impact on the ability to see the stars, human health and the environment. Photo by Samantha Cristoforetti courtesy NASA/ESA.