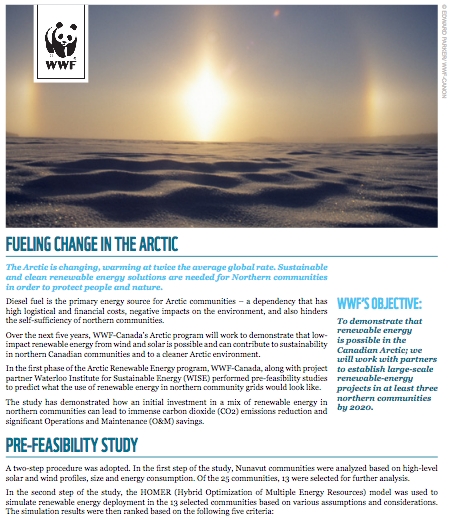 September 16, 2016 – Hybridized electricity production that includes renewable energy is projected to be less expensive than “business-as-usual” in some northern communities, researchers at the Waterloo Institute of Sustainable Energy have found.

These preliminary findings are being shared at the Arctic Renewable Energy Summit this week—co-hosted by the federal government, Government of Nunavut, Qulliq Energy Corp. and WWF-Canada—in Iqaluit. The full study, commissioned by WWF-Canada, will be released in October 2016.

A pre-feasibility study released earlier this year found that investment in a mix of renewable energy in remote northern communities could lead to significant reductions in diesel use and in diesel power-plant operations and maintenance costs.

Key findings for the Nunavut community of Sanikiluaq:

• Almost 50% renewable energy penetration will lead to a 35% reduction in diesel use and savings of close to $2-million over 10 years in overall costs (capital, operations and maintenance, fuel cost—upwards of 10% of overall costs).

Key findings for the Nunavut community of Arviat:

• Close to 60% renewable energy penetration will result in a cost reduction of approximately $2.5-million over 10 years (approx. 10% savings, in terms of overall costs) and almost 40% reduction in diesel use.

Another conclusion from the study was: wind power is the preferred renewable energy option for all communities and that “the 20-year results are even better”.

“As a longtime resident of Iqaluit, I count on the lights coming on in February,” said Paul Crowley, WWF-Canada’s VP, Arctic Conservation. “This evidence should give everyone confidence in moving forward with renewable energy – and the time is right, as Nunavut is facing decisions about replacing costly diesel generators. Renewable energy is a cleaner, more sustainable energy source that gives our communities independence and is better for the Arctic environment.”

WWF-Canada says it is working to see large-scale, habitat-friendly renewable energy projects in at least three northern communities by 2020.