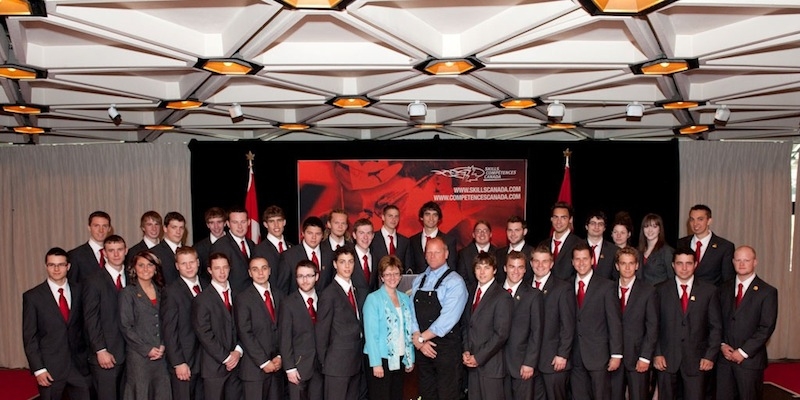 July 6, 2011 – Skills Canada, contractor Mike Holmes and minister of Human Resources and Skills Development, Diane Finley, gathered in Ottawa last week for the Champions Breakfast with Team Canada 2011. The event was the official ‘send off’ for Team Canada as they prepare for WorldSkills London 2011 – the self-proclaimed world’s largest international skills competition with young people from across the globe competing to be the best of the best in their chosen skill.

From October 5-8, 2011, these Canadian young men and women will take the stage in London, UK, to compete amongst 1000 young people from 54 regions/countries. With skills ranging from hairstyling, to carpentry, to Mobile Robotics, Canada’s 34 competitors will be representing 32 of the over 40 trades and technology contests showcased.

On their final leg of training, Team Canada gathered for the last time before making their way to London this fall. With only three months until WorldSkills London 2011, organizers said the team has been pushing their training program into overdrive, with more clocked training hours, more repeated techniques, and mental preparation for the competition. Alongside their trainers and experts, they are also taking in motivational workshops to manage the stress, anxiety and fatigue, they said.

Mike Holmes, the host of Holmes Inspection‚ has also announced that he will be accompanying Team Canada to the fall competition, where he said he plans to support them over the four-day competition and stay to watch them reach for the podium.

Holmes, as part of the Canadian Delegation, will also participate in the Leadership Forum and network with industry, education and other Member organizations around the world to help build awareness for the importance of skilled trades in the global marketplace.

“I would like to wish everyone from Team Canada all the best at the WorldSkills competition in London,” added Finley. “As Canadian champions, you inspire other young people to discover careers in trades and technology. Our government is dedicated to improving opportunities for Canadians through skills development and that is why we are very proud to support Team Canada.”