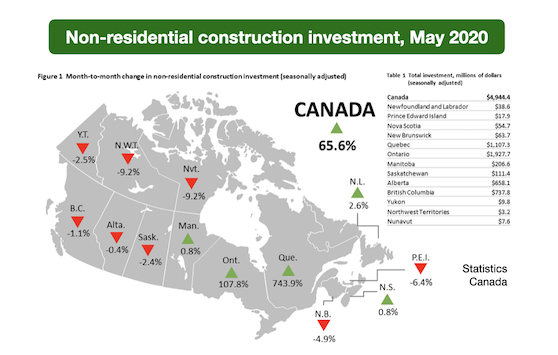 The easing of covid-19 construction restrictions in May—most notably in Ontario and Quebec—led to growth in all components of residential and non-residential investment.

Despite rebounding strongly in May, investment levels remained 16.5% below the level observed in February 2020.

Although all provinces started to reopen their economies—including the construction sectors—in May, the most impactful policy changes were made in Ontario, Quebec and Prince Edward Island during the month.

In Quebec, all sectors of the construction industry were authorized to resume activity on May 11 under strict guidelines of the Commission des normes, de l’équité, de la santé et de la sécurité du travail.

Lastly, in Prince Edward Island, new construction projects were permitted to start on May 1, following a 5-week work stoppage.

Investment in residential construction rose 57.0% to $8.4 billion in May. Investment in single-unit construction bounced back 71.7% to $4.1 billion, exceeding multi-unit growth which increased 45.2% to $4.3 billion.

Although Ontario and Quebec reported the largest provincial gains for the month, all provinces bounced back somewhat from sharp declines in April. Despite these strong gains, residential investment remained 22.7% lower than February, before covid-19-related restrictions were put in place.

Non-residential construction investment, meantime, increased 65.6% to $4.9 billion in May. All three components of non-residential investment (industrial, commercial, institutional) increased, with gains in Ontario and Quebec more than offsetting declines in five other provinces.

The commercial component represented the majority of non-residential construction gains, up 99.0% to $2.9 billion. Nearly all of the increase was in Ontario and Quebec, with both provinces returning to more regular construction activity, but still remained slightly lower than February.

Manitoba (+0.4%) was the only other province to report growth for the month in this component.

Gains in both the industrial (+35.1%) and institutional (+32.9%) sectors were also led by increases in Ontario and Quebec. Nationally, while reporting notable improvements, these components were still down 4.7% and 0.8%, respectively, from February levels.