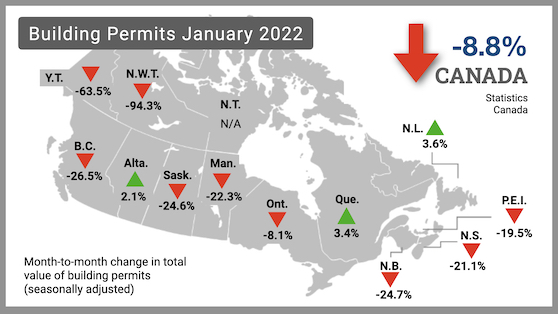 The multi-family component really dragged down the residential sector (-18.5%), while intentions for single-family homes decreased by 3.8%. Most of the declines were in Ontario and British Columbia.

The commercial component decreased by 10.2% in January, pulling down the entire non-residential sector.

Ontario and British Columbia, again, reported the largest declines in this sector. In BC, the decline signified a return to more normal levels following a strong December, says Statistics Canada.

Nationally, the decline in commercial construction intentions was partially offset by a 15.2% increase in the industrial component.

Construction intentions in the institutional component were slightly lower in January (-2.6%) compared with the value in December.