The total value of building permits in Canada fell 17.5 per cent in September to $10.2 billion, the largest recorded monthly decline, according to StatsCan.

This was the first time all survey components posted monthly decreases since September 2019. Both the residential (-15.6% to $7 billion) and the non-residential (-21.5% to $3.2 billion) sector posted declines. 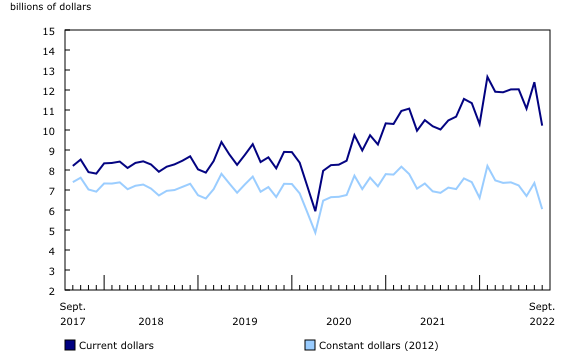 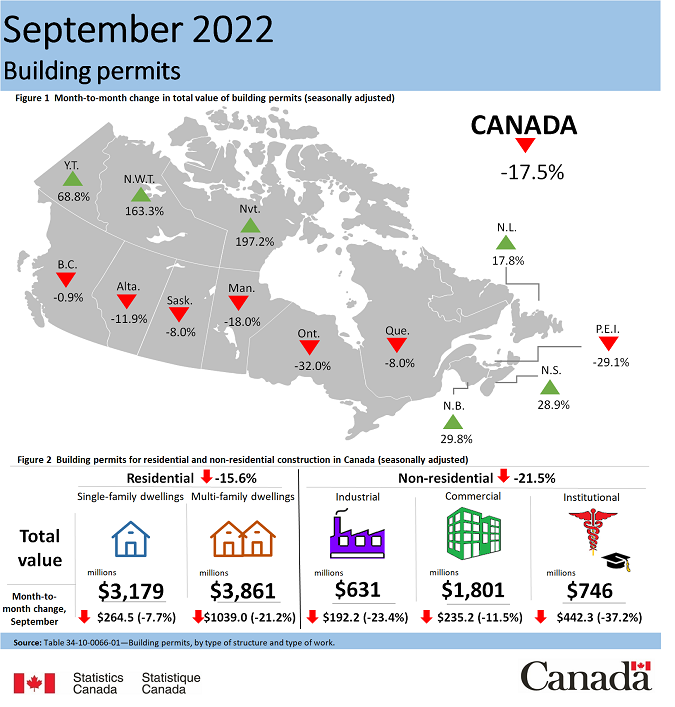 The value of residential permits decreased 15.6 per cent to $7 billion nationally in September, with a similar decline in the number of units (-16%) being built.

The value of building permits in the multi-family component tumbled 21.2 per cent. This drop was largely due to Ontario, which fell 39.6 per cent following a record high in August. While August saw the submission of four permits valued at over $100 million in Ontario, including one for $480 million, there were no permits in September to break the $100 million mark. 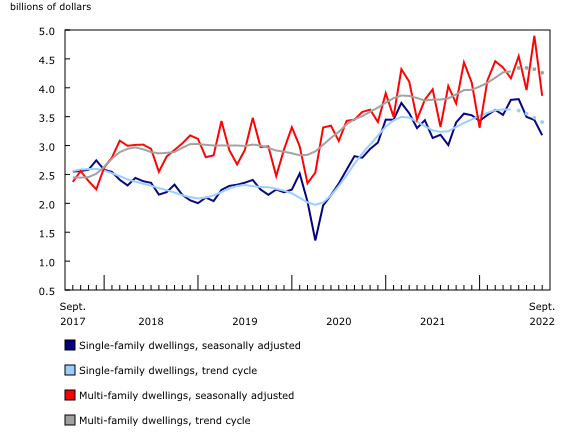 Value of building permits for the residential and non-residential sectors 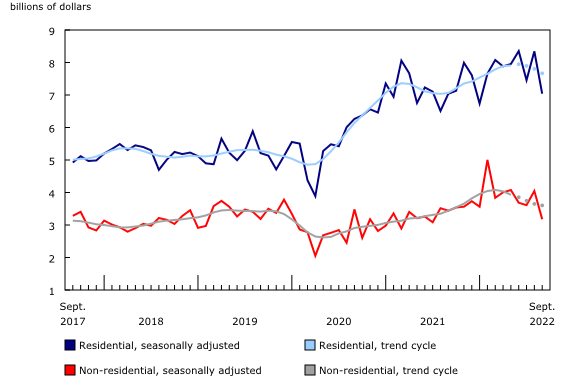 Non-residential sector down across all components

The total permit value of the non-residential sector decreased 21.5 per cent to $3.2 billion in September.

The institutional component, after three consecutive monthly increases, dropped 37.2 per cent in the month.

Construction intentions in the commercial component fell 11.5 per cent, with decreases posted in nine provinces. The two provinces to post gains were British Columbia (+37.9%), after three consecutive monthly declines, and Quebec (+22.3%), after posting the lowest value of the year in August.

The value of building permits in the industrial component declined 23.4 per cent, reaching the lowest point since late 2021 and has been on a downward trend since then.

The total value of building permits in the third quarter of 2022 decreased 6.3 per cent to $33.7 billion after three consecutive quarterly increases.

The residential sector declined 5.6 per cent in the quarter, with decreases posted in all provinces, returning the sector to historic levels following a strong second quarter. Single-family permits declined nine per cent, while multi-family permits were down 2.6 per cent.

Overall, the number of new units slated for construction in the residential sector declined 7.4 per cent. Much of the decrease stemmed from the multi-unit component (-7.8%) as it reached its lowest point since the third quarter of 2020. Single-family intentions saw a 6.2 per cent decline.

The non-residential sector saw a 7.9 per cent decrease to $10.8 billion, with declines in all components.