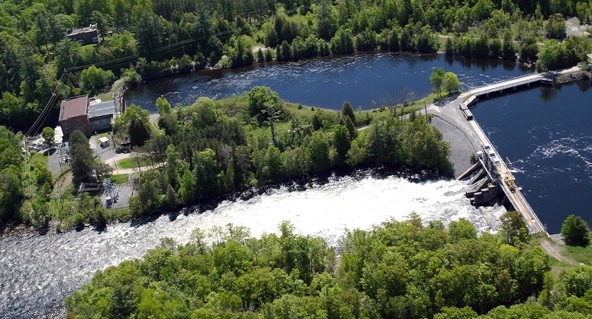 August 10, 2017 – Constructed and developed during World War I by the Calabogie Light & Power Co., OPG’s Calabogie Generating Station is celebrating its 100th anniversary this November. Congratulations!

The GS is located in Greater Madawaska Township on the Madawaska River, downstream from Barrett Chute GS (not far from Renfrew, Ont.).

According to OPG, the development was owned and operated by M.J. O’Brien Ltd., of Renfrew before being acquired by Hydro-Electric Power Commission of Ontario is 1929. The asset was then transferred to OPG in April 1999.

The Calabogie Generating Station first supported local development and the lumber industry. “Its speedy completion was remarkable, given that power was available only seven months after construction started. This was made possible by adapting plant equipment that was built for another hydroelectric station.”

Some of the earliest commercial lumbering in Ontario began along the Madawaska between 1860 and 1890, due to the growing demand for lumber in Upper Canada and ships’ masts for the British Navy, says OPG. Not only did the river provide access to remote stands of timber, it was also used for transporting logs.

As early as the 1840s, log slides and booms were built on the river and dams were constructed at Calabogie, Highland Chute, Mountain Chute and Arnprior to support logging operations. By the 1920s, lumbering had declined and the Madawaska River was used more for hydroelectric generation.

The station is currently being upgraded with new sluice gates and other repairs. The refurbishment work is scheduled to be completed later this year.

— With files from OPG.