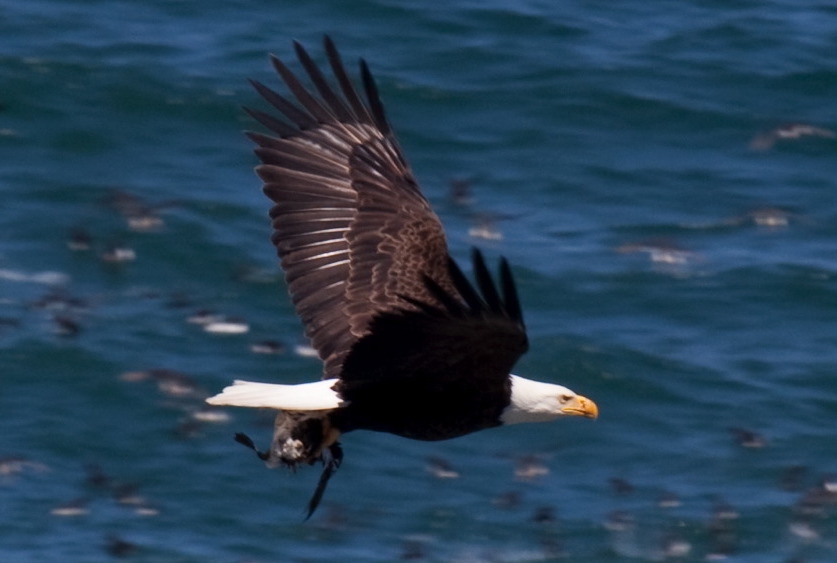 A bald eagle makes off with its prey. Photo courtesy Roy Lowe via Oregon State University.

According to Oregon State, wind turbine towers can rise up to 300 ft, and are typically equipped with three blades boasting wingspans double that of a Boeing 747. At their tips, the blades are moving close to 200 mph. And they’re a danger to flying creatures, including bald and golden eagles.

The U.S. Department of Energy (DoE) Wind Technology Office has awarded Roberto Albertani of the OSU College of Engineering a 27-month, $625,000 grant to develop technology for detecting and deterring approaching eagles, and for determining whether a blade strike has occurred.

Albertani’s team will work on a three-part system for protecting the eagles. “We’re the only team in the world doing this kind of work,” said Albertani, an associate professor of mechanical engineering.

The system will feature a tower-mounted, computer-connected camera able to determine whether an approaching bird is an eagle and whether it is flying toward the blades. When both answers are Yes, the computer triggers a ground-level deterrent: randomly moving, brightly coloured facsimiles of people, which are designed to play into eagles’ apparent aversion to humans.

“There’s no research available but, hopefully, those will deter the eagles from coming closer to the turbines,” Albertani said. “We want the deterrent to be simple and affordable.”

At the root of each turbine blade will be a vibration sensor able to detect the kind of ‘thump’ produced by a bird hitting a blade. Whenever such a thump is detected, recorded video data from a blade-mounted micro-camera can be examined to determine whether the impact was caused by an eagle or something else.

“If we strike a generic bird, sad as that is, it’s not as critical as striking a protected golden eagle, which would cause the shutdown of a wind farm for a period of time, a fine to the operator, big losses in revenue and, most important, the loss of a member of a protected species,” Albertani said.

If successful, Albertani says, the system they develop will be a “major breakthrough in a safer-for-wildlife expansion” of wind energy worldwide.

Primary field testing will take place at the North American Wind Research & Training Centre in Tucumcari, N.M., and the NREL National Wind Technology Centre in Boulder, Colo. Fieldwork will also be done in Oregon and California.