Features Blog
Can you be an environmentalist AND NOT BE pro-nuclear? asks Pandora’s Promise 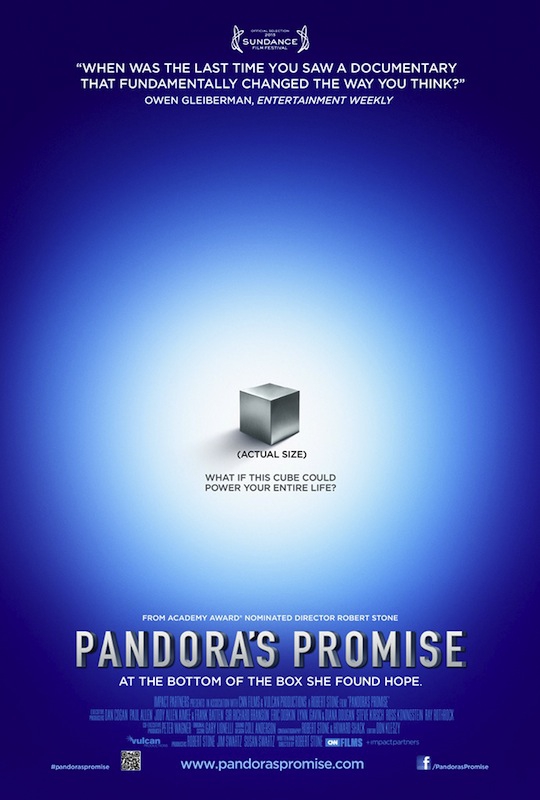 September 17, 2013 – The atomic bomb and meltdowns like Fukushima have made nuclear power synonymous with global disaster, but what if we’ve got nuclear power wrong? That’s the question posed by Pandora’s Promise, a new film by director Robert Stone, presented by Impact Partners and CNN Films.

Pandora asks whether the one technology we fear most could save our planet from a climate catastrophe while providing the energy needed to lift billions of people in the developing world out of poverty.

In his film, Stone tells the personal stories of environmentalists and energy experts who have undergone a radical conversion from being fiercely anti- to strongly pro-nuclear energy, risking their careers and reputations in the process.

The film operates from the assumption that, in the next few decades, humankind will need to double or even triple energy production, as billions of people in the developing world lift themselves out of poverty and begin to live modern lives. Unless the energy of the future is clean and non-CO2 emitting, the risk of triggering global climate catastrophe is almost certain.

This dilemma, and the limitations of solutions like wind and solar, have left the mainstream environmental movement on the verge of utter disarray, notes the film.

Three years in the making and filmed on four continents, Pandora asks whether the one energy source that has the ability to completely replace fossil fuels might be the one technology that environmentalists fear the most: nuclear power.

Intrigued by the story of a number of environmentalists who have had a fundamental change of heart about nuclear energy, Stone juxtaposes the personal narratives of five individuals to explore how and why they have come to see advanced nuclear power as humankind’s greatest hope. Tracing their transformations, Stone turns to science, taking viewers along for the ride on his subjects’ intellectual odyssey.