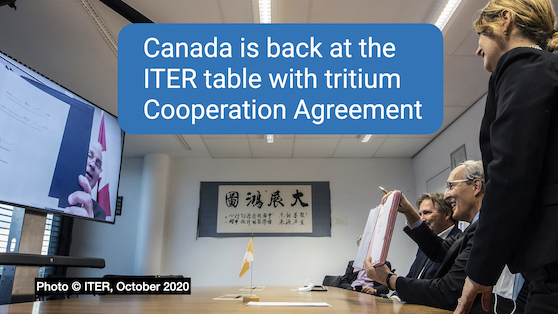 Nearly 20 years after the initial offer to host the international ITER fusion project, Canada is back at the table. ITER director-general Bernard Bigot (right) and Assistant Deputy Minister Dan Costello (on screen) sign a Cooperation Agreement on October 15, 2020. Photo © ITER.

October 30, 2020 – In mid-October, Bernard Bigot, on behalf of the ITER Organization, and Assistant Deputy Minister Dan Costello, on behalf of the Canadian government, signed a Cooperation Agreement for the transfer of Canadian-supplied nuclear material (tritium) and tritium-related equipment and technology.

While Canada never did get to host the experimental fusion reactor (back when sites were being selected), the two parties signed a Memorandum of Understanding agreeing to explore the possibility of future cooperation in April 2018.

ITER will begin producing deuterium/tritium plasmas in the mid-2030s. Over the course of its experimental campaign, it will consume the totality of the world tritium inventory, which amounts to only a few dozen kilos.

The main source of tritium, which occurs naturally only in trace amounts, is a type of fission reactor called the CANDU. Developed in Canada in the 1950s and 1960s, CANDU reactors use natural uranium as fuel and heavy water as moderator, generating small quantities of tritium as a by-product.

There are presently 31 CANDU reactors operating around the world, 19 of them in Canada. Beyond direct cooperation with Canada, the Cooperation Agreement signed this month is indispensable, says ITER, to allow for the “retransfer of technologies from countries such as Korea or Romania, both partners in ITER, who also operate CANDU reactors”.

The establishment of this Cooperation Agreement with the Government of Canada will enable ITER to associate “one of the largest and most experienced, technically-relevant tritium communities outside of the founding ITER Members”.