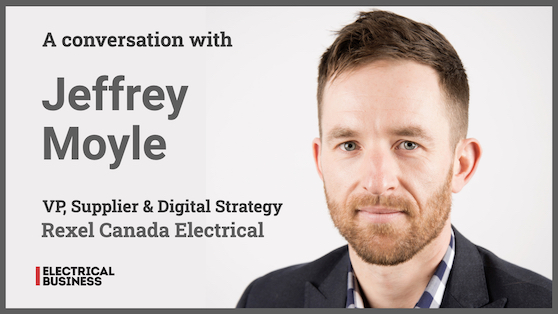 Especially considering government investments in infrastructure—like our electric grid—across the country, Jeffrey believes the acquisition was a fantastic decision… but not just for Rexel and the three brands under which it operates in Canada (Rexel Atlantic, Westburne, Nedco).

No, he sees opportunities for everyone across the spectrum—from electrical professionals and their distributors, to manufacturers, trade schools, students and engineers.

This led to a broader conversation of post-pandemic Canada, and the electrical distributor’s role in the coming years.

Jeffrey feels the sector in North America is entering a post-pandemic Renaissance phase. “We have an opportunity to define who we are going forward,” he says, and that means being something other than just a low-cost provider.

“Being a low-cost provider […] is someone’s business out there; but by adding value, being able to help the customer base, being able to train and educate, we push the industry forward,” he says.