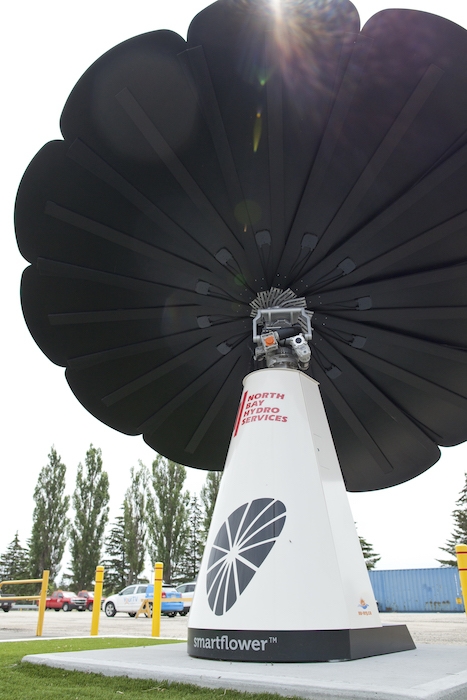 Developed largely in response to the 2013 ice storm that left hundreds of thousands of people across Ontario without power for prolonged periods, the 789-kW microgrid is designed to keep an ‘island’ of critically important buildings powered in case of another winter storm or other disaster, so they can provide community shelter for North Bay’s 51,000-plus residents.

As such, the project can supply enough energy to heat the Community Energy Park’s buildings, which include the town’s YMCA aquatic centre and Memorial Gardens sports arena. It will use two 265-kW natural gas-fuelled generators, 7-kW rooftop solar panels and a 2-kW solar ‘flower’ for on-site generation, providing 87% of the buildings’ electricity requirements and more than 50% of their electrical heating needs. In addition to providing safe refute during outages, the setup will greatly improve North Bay’s overall power efficiency.

“Utilities everywhere are wrestling with the future of the electrical grid,” says Paul McMullen, vice-president (VP) of S&C’s Canadian business. “The Community Energy Park is a preview of what’s to come.”

“This shows how forward-thinking approaches to power delivery can be used to protect our community,” says Matt Payne, president and chief operating officer (COO) for North Bay Hydro. “We are proud to be setting the example for other utilities.”