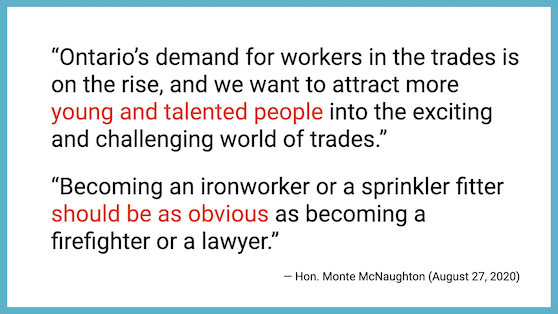 August 29, 2020 – Ontario announced it is investing $43 million in expanded youth training programs to give young people exposure to employment options in the trades, and has also appointed three youth advisors to help attract youth to the trades.

“Ontario’s demand for workers in the trades is on the rise, and we want to attract more young and talented people into the exciting and challenging world of trades,” said Monte McNaughton, Minister of Labour, Training and Skills Development.

Becoming an ironworker or a sprinkler fitter should be “as obvious as becoming a firefighter or a lawyer,” he added.

The government’s investments to attract and train youth in the trades include:

• $5 million (an increase of $3.5 million) to Skills Ontario so they can increase awareness of the trades among elementary and secondary students.

• $17 million (an increase of $2.3 million) in the Ontario Youth Apprenticeship Program (OYAP) to send representatives to schools to provide high school students with the opportunity to learn about work in the skilled trades, and/or train as apprentices while completing their Ontario Secondary School Diploma.

• $21 million in Ontario’s Pre-Apprenticeship Training program, giving students and graduates exposure to a variety of jobs in the skilled trades. The program is free for participants and includes a work placement.

The three Youth Advisors, meantime, will engage with youth, educators, business, parents and other partners—as well as the Minister of Labour Training and Skills Development—on how to reduce stigma and make the trades a viable first choice for young people.

They will advise on increasing awareness of the skilled trades among elementary school students, starting in Grade 1, with a focus on grades 7 and 8, and on making it easier for high school students to learn about the options in the trades, and to begin an apprenticeship pathway while continuing to earn secondary school credits.

Jennifer Green is the director of Competitions and Young Women’s Initiatives at Skills Ontario. She holds a C of Q, a Certificate of Apprenticeship, and an Ontario College Certificate for Industrial Mechanic Millwright.

Andrew Pariser is the vice-president of Residential Construction Council of Ontario since 2014. He graduated from Queen’s University with a BA in economics and geography, then later with a Master’s degree in industrial relations.

“Today’s announcement reflects our government’s priority to encourage youth to explore the tremendous opportunities in skilled trades,” said Jane McKenna, Parliamentary Assistant to the Minister of Labour, Training and Skills Development. “A career in the skilled trades is both rewarding and life changing.”