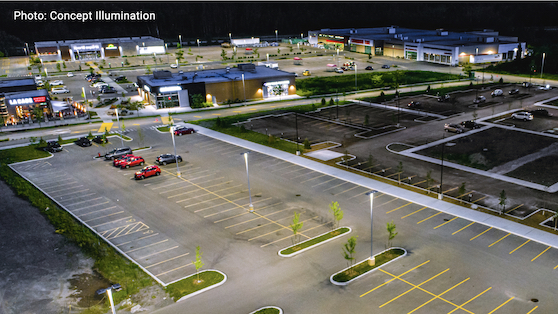 Carrefour’s owner, First Capital REIT, had a mandate to convert all of its parking lots to LED lighting, explains Concept Illumination’s Daniel Herz, “but this property is a bit of an outlier because of its size. It’s quite large”.

The Carrefour du Plateau retrofit was, in fact, the largest project that First Capital had ever tasked Concept with completing.

“It took guts to do it. This is a big property, it was a big spend,” says Gary Hurley, senior property manager for First Capital REIT.

The LED retrofit was not only fuelled by a desire to reduce maintenance costs and save energy, but also to improve the overall lighting quality at the shopping centre. There were definitely some areas that could have benefited from better illumination.

Besides the corporate mandate, there was another initiative at play—rebates from Hydro-Quebec—which also helped make the lighting retrofit an attractive endeavour.

Getting the job done

“A variety of different light distributions were utilized to maximize coverage and uniformity,” Herz explains. A rigorous site survey and photometric analysis were conducted to optimize the results and to validate existing wattages, voltages, dimensions and product finishes.

“We had had conversations about possibly adding floodlights on a few select poles—you know, to punch up the light levels in those areas—but I suggested we do the lighting retrofit first, then reassess whether any additional fixtures are even required,” says Herz.

Because Concept follows Illuminating Engineering Society guidelines when spec’ing a job, Herz was fairly confident they would not need any additional fixtures afterward.

Given the variety of fixtures being installed, a detailed installation guide was prepared, and all boxes were colour coded upon delivery to ensure a quick and accurate installation, Herz added.

“This is the largest single outdoor lighting project we’ve completed for First Capital. Carrefour du Plateau was part of a seven-property project in Ottawa-Gatineau, completed in the fourth quarter of 2020,” Herz explains. “All properties needed to be completed by the end of December, but Carrefour has more poles than all of the other properties combined.

“Obviously, we prefer outdoor work in the spring, summer and fall, but we’re not always so lucky,” Herz says with a chuckle, adding that one of the biggest challenges was not the weather, but rather the removal of the old fixtures.

“New fixtures include all-new hardware, new screws, etc., unlike existing fixtures where all the screws are rusted out, all the hardware is rusted out… and that’s what actually makes things a little bit complicated.”

There were anywhere from one to two teams onsite each day (each team is two installers). Because the work was going on during pandemic, the parking lot wasn’t as busy as it would have normally been, and no work was required after-hours. The teams would often start work as early in the day as possible—before tenants and customers arrived. They would start with fixtures closest to the shops, then work their way outward.

On occasion, the teams would cone-off a small area here or there, but nothing disruptive to the overall tenant and patron experience.

Like the industry at large, Concept’s work was also impacted by supply chain disruptions, but Herz notes they weren’t severe enough to derail the overall job, and he credits the lighting supplier for stepping up to help assure project success.

To Herz, it’s very important to light the space well; otherwise, why bother with lighting in the first place? “To First Capital’s credit, they care about the end result. They want it to look good; they want it done right.”

Concept was tasked with completing the job in December 2020 and, over a two-week period, they did just that. Here we are now, two years later: did everything work out as intended?

“There’s uniformity in the lighting; much cleaner lighting. It makes a difference,” Hurley says.

First Capital REIT has been experiencing savings between $8000 to $10,000 annually on their electricity bills at smaller centres where similar LED retrofit projects were undertaken, Hurley says. At Carrefour du Plateau, he hopes to see savings in the range of $12,000 to $15,000 annually.

“To me, it’s a nice little bonus that with better lighting you’re going to have less consumption,” Hurley adds.

It sounds as though energy savings and better lighting have been achieved. What about maintenance?

“Since the project was completed in December 2020, there has been no required maintenance,” says Herz, and he would be the first to know. If there are any issues with the lighting, “they would call us, because it’s all under warranty.”

Herz doesn’t know the client’s maintenance spend prior to the retrofit, but he does know the cost to change a bulb or a ballast can run the owner anywhere between $500 to $1000 per fixture. That would quickly add up for a property of this size.

In addition to the annual electricity and maintenance savings, First Capital REIT received a $22,896.45 rebate from Hydro Quebec for the project.

“Tenants don’t want to overpay, but they want the best,” Hurley says. “We got the best lighting, less consumption and the rebate—that’s a win-win-win.”