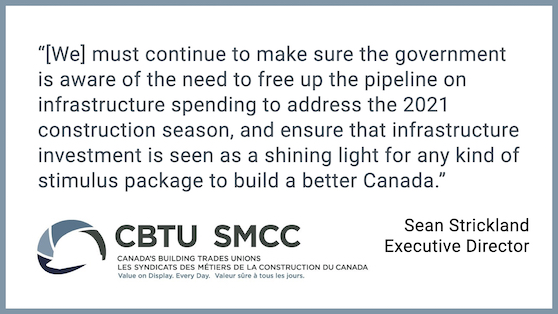 November 30, 2020 – Earlier today, federal Finance Minister Chrystia Freeland tabled the Fall Economic Statement 2020 in the House of Commons. Helping to make sense of it all—and how it impacts the construction sector—is Sean Strickland, in the following Statement from Canada’s Building Trades Unions:

“Today, Minister Freeland delivered the Federal Fiscal Economic Statement, which laid out the stark reality of a tough winter ahead as we continue to face a rising number of COVID-19 cases across the country. To temper that, the Federal Government is taking steps to support Canadians, including announcing plans to increase the maximum rate of the Emergency Wage Subsidy back up to 75% beginning in late December. The federal government also included an update on the projected deficit, which could reach upwards of $380 billion. For the building trades, while specifics were few and far between, some highlights include:

Up to $100 billion in stimulus spending (three years of stimulus spending worth 3 to 4% of the GDP—to jumpstart the economy once the virus is under control. This is above and beyond the previously announced ICIP funding. We need to continue to advocate the facts that infrastructure spending has proven historically to offer greater benefits in terms of economic stimulus, because of the multiplier effect, totalling a greater return on investment for tax dollars spent.

Along with investments to support closing the infrastructure gap in Indigenous communities, the government will invest $1.5 billion starting in 2020-21, and $114.1 million per year ongoing thereafter, to accelerate work to lift all long-term drinking water advisories and stabilize funding for water and wastewater infrastructure—including operation and maintenance costs—in First Nations communities.

$1.5 billion in Workforce Development Agreements with provinces and territories, which will bolster support for programs like Indigenous Skills and Employment Training Program, the Foreign Credential Recognition Program, the Opportunities Fund for Persons with Disabilities, and the Women’s Employment Readiness Canada pilot project. This is in addition to the $3.4 billion already being provided by the federal government to provinces and territories under the Labour Market Development Agreements and Workforce Development Agreements in 2020-2021. I am hopeful that this type of support will respond to the increased number of Canadians looking to re-enter the workforce due to the job losses felt by the pandemic.

Students, including apprentices, will see the elimination of the interest on repayment of the federal portion of the Canada Student Loans and Canada Apprentice Loans for 2021-22. If followed through, this will bring $329.4 million in relief to up to 1.4 million Canadians, including many in the construction industry.

The government will also continue to invest in building more recharging and refuelling stations for zero-emission vehicles across highways in Canada, with $150 million to accelerate the construction of these stations over the next three years.

$150 million over three years, starting in 2020-21, to Infrastructure Canada to improve ventilation in public buildings and help reduce the spread of Covid-19.

While the announcement of $100 billion in future federal stimulus is positive, we must continue to make sure the government is aware of the need to free up the pipeline on infrastructure spending to address the 2021 construction season and ensure that infrastructure investment is seen as a shining light for any kind of stimulus package to build a better Canada… and that it must include Community Benefit Agreements to ensure a fair and equitable recovery.

I am hopeful to see the federal government recognize the importance of stimulus spending in getting the Canadian economy back on track. I know that the construction industry—and more specifically, CBTU members—can and will play a significant role in Canada’s economic recovery over the next few years.”