Features Articles
Celebrating a century of higher standards with CSA 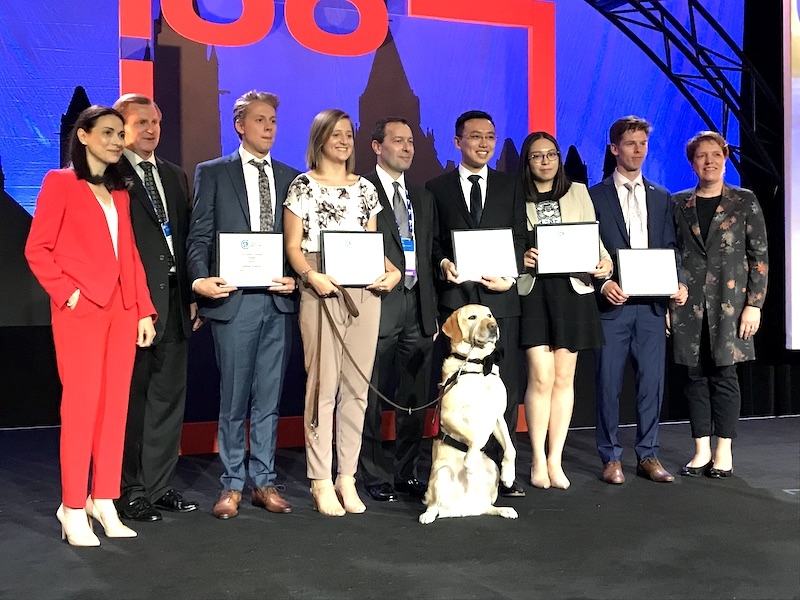 Academic Challenge finalists after pitching their ideas for a new standard. Photo A. Capkun.

July 10, 2019 – “Standards can lead to innovation, but innovation can demand the creation of a standard.”

Those words were spoken by Joe Bhatia, president and CEO of ANSI, at CSA Group’s recent Annual Conference & Committee Week. His simple statement highlights the interdependence between standards and innovation, especially against the backdrop of community safety and consumer confidence.

I used to take standards for granted: they somehow just come into existence, yet we expect the products we buy, the services we use and the entities with whom we deal to follow a standard of some kind. Those organizations that do not are, quite naturally, dubious.

It wasn’t until I attended my first CSA Committee Week that I began to understand all the work that occurs behind the scenes in creating a consensus-based standard (like the Canadian Electrical Code, for example).

And this year, CSA is celebrating 100 years of making standards happen—hand-in-hand with innovations—in technologies as diverse as electric vehicles, alternative fuels, nano materials, wind and solar energy and fuel cells … and they’re not resting on their laurels.

I was honoured to be in Ottawa last month to join CSA staff and volunteers in the celebrations and report on their work. (Photos further down.)

Bringing codes and standards into this century
A bit of history: the Canadian Engineering Standards Association (CESA) was established in 1919 as a volunteer committee to develop standards “that would help Canada move forward as an industrialized nation and advance the technology of the day.” A few short years later, CESA published the first Canadian Electrical Code-Part I.*

Speaking of CSA C22.1, “Safety standard for electrical installations,” wouldn’t you agree that standards are, generally, rather onerous? Anyone who has picked up the CE Code knows it to be quite the hefty document.

For many years, the CE Code was only available as that heavy tome, but then technology allowed it to be made available as a PDF file. While this helped lighten the load, it did not necessarily do anything to help users better understand CSA C22.1, especially when you get into cross-referencing one standard against another. Hence the importance of training guides, articles and columns like EBMag’s “Code File” and webinars and presentations to help users better understand the code.

But this is the 21st century! Can we not find new means to help improve usability and understanding?

Answering that question was Anand Inbasekaran, CSA’s director of digital transformation. After being introduced by Mary Cianchetti, president of standards, Inbasekaran took to the stage to address three main problems with standards as they are currently presented: usability, missing context and comprehension.

“Standards development organizations (SDOs) have been trying to tackle these problems through different formats, quick-reference guides and training,” he said, “but none of these adequately address the problems.”

Which is why “transformation is about re-imagining the problem,” he added, before launching into a discussion of the digital tools CSA is working on to address these challenges.

It starts with ‘personalized standards’… essentially, through an app, you make a ‘playlist’ of the standards and related clauses you need to reference to perform a specific task. This app would be accessible across all digital platforms and address the usability problem.

But it doesn’t stop with just one app. From there we move into an augmented reality (AR) companion app, which displays additional information and graphics through your phone or tablet, beyond what you see on the printed on the page.

For an example of this (it’s pretty cool), SEE my VIDEO, “Codes & Standards for the 21st Century.”

And so, with AR and AI, CSA aims to address the remaining problems of missing context and comprehension.

The next generation of standards experts
One of the highlights of the week was the Academic Challenge, in which three student team finalists from various post-secondary schools across the country competed for the audience’s vote for their standard development idea. Each team took to the stage and made their pitch.

The challenge serves a very important role in attracting the next generation of volunteer experts to various technical committees to ensure Canada continues to be a relevant player in global standards development.

Team A discussed the need for a consensus standard on “Providing quality service dogs”—one that would properly define a service dog versus ‘companion’ or ‘therapy’ dogs (the latter of which, by the way, do not any perform specific tasks).

Team B pushed for a consensus standard on “Safety management in residential construction,” noting small companies (i.e. comprising fewer than five workers) experience a high injury rate, likely because they do not employ safety management systems.

“DC devices are beginning to overtake AC devices,” argued Team C, explaining the dream home of the future is a DC one; that is, a home wired throughout for direct current, rather than alternating. Yet, the “CE Code prevents DC receptacles.” Team C believes we need consensus standards now for residential DC distribution.

Conference delegates then voted directly (small hint there) for their favourite presentation via secret ballot, but the winner would not be revealed until the Awards Night later on.

Standards on the global stage
The conference assembled a panel of experts to give their perspectives on the importance of standards development in an innovation-focused world, along with the chief technology officer (CTO) for Canada’s Ocean Supercluster, Susan Hunt, presumably to speak on behalf of organizations on the leading edge of innovation.

The panelists included Chantal Guay, CEO of the Standards Council of Canada (SCC); John Walter, president of the International Organization for Standardization (ISO); and the aforementioned Joe Bhatia, president and CEO of the American National Standards Institute (ANSI).

But the speed at which a standard is developed “depends on the nature of the document and its impact on people and property,” Bhatia reminded us. “You cannot rush stuff like that, nor would you want to. You need to involve all kinds of people and groups to weigh in on those documents.”

“You also have to be considerate of your volunteer members on the technical committees,” added Walter. “They already donate a lot of time.” (This last statement was met with great approval from the delegates, many of whom give their hours to a variety of technical committees and sub-committees.)

Global technologies will also require better co-operation and collaboration between other groups and nations.

“Technology like the Internet of Things (IoT) involves not just traditional electrical, but players like the International Telecommunications Union,” said Guay.

“International collaboration is vital to all countries, ultimately, to be commercially viable,” Bhatia agreed.

Unfortunately, it seems co-operation and collaboration aren’t always top-of-mind in the global standards community. For example, Walter noted China is spending trillions of dollars in a variety of countries and, “like it or not, they are setting their own standards.”

“China is not transparent, they don’t co-operate and they don’t collaborate,” Bhatia complained. “The European system, too, is not fair. They collaborate amongst themselves—even sit on our own committees—but we are not invited to sit at their table.”

“Some nations see co-operation with other nations as a sign of weakness, as ceding authority, but that’s nonsense,” Walter said. “It’s the way things get done.”

Academic Challenge finalists after pitching their ideas for a new standard. Photo A. Capkun.

Conference wrap-up
The Annual Conference culminated with the Awards Night celebration, where Awards of Merit and the John Jenkins Award were bestowed. The winning Academic Challenge team was also announced: Team C, the DC home.

SEE ALSO Electrical maintenance, streetlighting and more shine at CSA Awards Night for our recap of the awards night honorees, which focuses on those with an ‘electrical’ connection.

Whether as an expert or as an end user, we all have a stake in standards development. Canada needs more experts in this area and CSA’s consensus-based process—from what everyone tells me—is second to none.

I highly encourage those with an interest in community safety, consumer confidence and a level playing field to consider volunteering their expertise to one or more technical committees. As an employer, you may have some gifted staff members who would serve the standards community well. You should encourage them to participate and support them when they do. Knowledge transfer is a two-way street: besides sharing what they know, they also absorb wisdom from many other experts, all of which they can bring to bear in their tasks for you in product development, training, etc.

Standards can lead to innovation, but innovation can demand the creation of a standard … and the work done by CSA Group and its committee volunteers—and numerous standards development organizations like them—keep the civilized world turning.