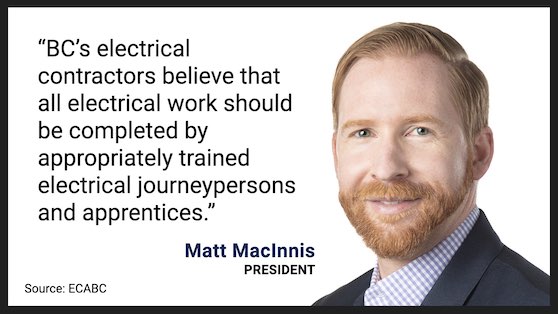 December 2, 2022 – British Columbia is moving forward with skilled trades certification in the province, saying this will help attract more people to trades careers while boosting the prestige of skilled trades overall.

“BC’s electrical contractors believe that all electrical work should be completed by appropriately trained electrical journeypersons and apprentices,” said Matt MacInnis, president, Electrical Contractors Association of British Columbia. “The important next steps are to increase the number of apprentices being trained to meet current and future demand, and ensure we are supporting electrical apprentices through to completion.”

Under the new skilled trades certification, uncertified workers in seven trades will have a one-year transition period to support them to get registered as an apprentice or become a certified journeyperson before December 1, 2023.

“The Electrical Joint Training Committee is thrilled, along with our labour and contractor partners, to welcome the re-establishment of skilled trades certification in BC,” said Phil Davis, managing director. “This is great news for tradespeople and for the construction industry in BC.”

When a worker in these trades is already a certified journeyman (including Red Seal endorsements) or a registered apprentice, nothing will change, as they already fulfil the requirements of being certified.

Meantime, the Industry Training Authority’s role of administering the BC’s skilled trades system is being strengthened, says the province, starting with a name change to SkilledTradesBC. The organization will aim to raise the profile of skilled trades, modernize trades training, and implement skilled trades certification by working with tradespeople, employers and industry partners.

“We are excited by our expanded mandate to implement skilled trades certification, and our new name will make it easier for people to understand who we are and what we do,” said Shelley Gray, CEO, SkilledTradesBC.

During the transition period, uncertified workers in these trades can continue working while they register as apprentices or get certified. Certification will require employers in these seven trades to follow a 2:1 apprentice-to-journeyman ratio, says the province, “to ensure high standards of supervision and quality training for apprentices”.

Both uncertified workers and employers have a one-year window to become certified, and can access supports from SkilledTradesBC, which include a team of multilingual certification and apprenticeship advisors located throughout the province. Workers or employers can contact SkilledTradesBC for more details online or by calling 778-328-8700.

Certification and level exams in these seven trades will be free during the one-year transition period, says the province, adding there are also a variety of provincial and federal supports to further reduce financial barriers to certification. These supports help cover costs associated with training, travel, living away from home, child care, and loss of wages.

“For too long, BC has been the only province in Canada without a skilled trades certification system […],” said Anne Kang, Minister of Advanced Education and Skills Training. “By bringing back and enhancing skilled trades certification, we’re turning that around—supporting better-paying, steadier work to attract more people to the trades, and helping employers find the workers they need […].”