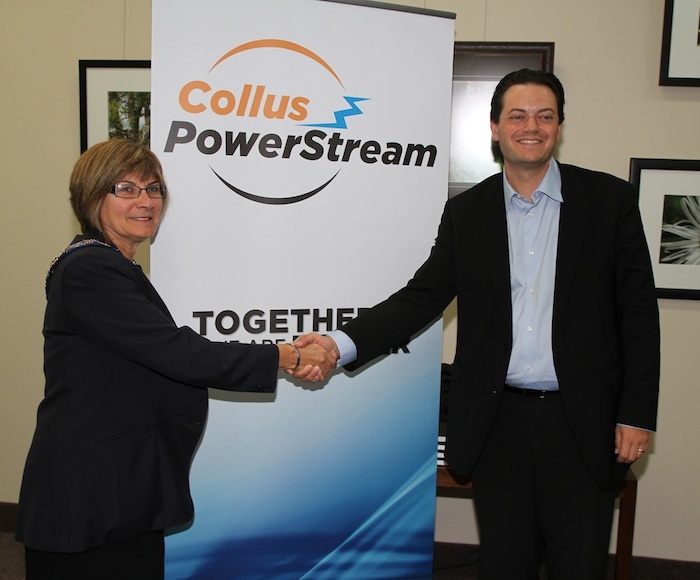 August 23, 2012 – “Collus PowerStream” has been unveiled as the rebranded name for the newly-owned PowerStream and Town of Collingwood electric utility. Formerly known as Collus Power, a new name, logo and brand were unveiled earlier this month as the two parties celebrated the closing of the joint ownership agreement on August 16 at Collingwood Town Hall.

“This is a tremendous day for Collus PowerStream’s customers and the communities it serves,” said Sandra Cooper, mayor of Collingwood, Ont.

“The closing of this agreement is the culmination of a great deal of hard work by many individuals and we are very pleased with this announcement. Both I and members of council are appreciative of everyone’s efforts to finalize this agreement that will help us be more efficient and cost-effective for customers being served by this new utility,” she continued.

Under the terms of an agreement approved by the Ontario Energy Board on July 12, the Town of Collingwood and PowerStream now each own a 50% interest in Collus PowerStream. Moving forward, PowerStream will also be providing support for several of Collus PowerStream’s operational areas under shared services agreements.

“PowerStream is pleased to welcome the Town of Collingwood as our partner in delivering utility services to customers in the area,” said Frank Scarpitti, PowerStream chair and mayor of the City of Markham, Ont. “This is a new framework for collaboration that fulfills on our strategy, and it’s made possible by great leadership by both organizations.”

The event also celebrated a $50,000 donation to Collingwood General & Marine Hospital Foundation. The donation was made by Collus PowerStream officials and included proceeds from the Collingwood Mayor’s Annual Golf Challenge Cup.