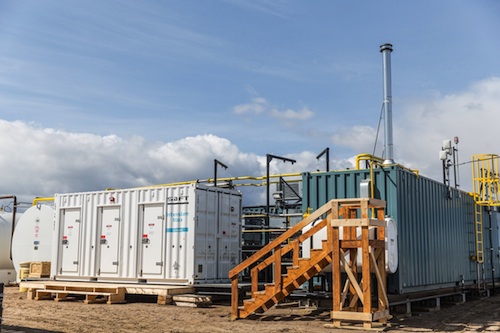 The batteries are in the white trailer, the controller is in the blue, and the generator trailer is behind. Photo courtesy NTPC.

June 3, 2016 – Individual generators were the source of electricity for Colville Lake, N.W.T. before the community built its first power plant in 1990. Now, the Northwest Territories Power Corporation (NTPC) and the Government of the Northwest Territories (GNWT) have opened the Colville Lake power plant with a new system: a solar/battery/diesel hybrid.

“This government’s investment of $1.15 million has proven successful with today’s opening of the Colville Lake solar/battery/diesel generation plant, representing that future we envisioned in the 2013 Energy Action Plan,” said Premier Bob McLeod on May 25, 2016, during the official celebration of the plant’s opening. “This future is one in which our energy use has less impact on our environment and where we are less reliant on imported diesel fuel.”

NTPC says the project has been in the works since 2013 when support from the community was attained through community engagement and consultation.

“It was an opportunity to do something extraordinary—try something that hadn’t been done before and something that might prove to be successful in the north,” said Emanuel DaRosa, president and CEO of NTPC.

Outages have decreased from more than 30 a year to just two since the system came online in December 2015, NTPC says, and about 80,000 L of diesel fuel will be displaced annually, based on the first quarter of 2016. About 55,000 of those are due to the higher efficiency of the new diesel engines combined with the batteries, the utility adds, and being able to run diesel engines at their optimum rate has improved efficiency by more than 25%.

An additional 24,000 L of diesel is being displaced due to the installed solar farm. The overall efficiency has increased by about 40%, according to NTPC.

“The project was a pilot to test the system and will be considered as other plants reach end of life and require replacing,” DaRosa said.