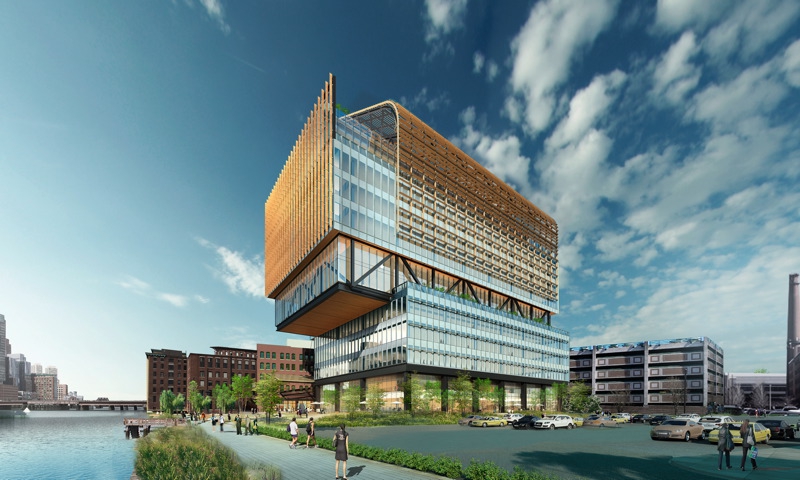 August 9, 2016 – Back in January, we told you GE was locating its new corporate headquarters in Boston, Mass. Last week, the company released detailed plans for the global HQ campus, which is scheduled to open in two phases in 2018 and eventually host about 800 GE employees.

“We want our campus to be a global epicentre of innovation; a place to foster relationships among our employees and the greater community,” said GE’s Ann R. Klee, who says the company expects the HQ to “transform the existing, unused site into a hub of technology, innovation and intellectual stimulation”.

As part of the construction process, GE will rehabilitate two historic brick buildings and construct a new 12-storey building connected by a bridge and a pedestrian-only walkway. The architect for the project is Gensler. The 2.4-acre campus will include:

• Maker space for GE employees and co-collaborators, as well as hands-on classroom workspace for tech start-ups, university and high school students, and the community to explore STEM (science, technology, engineering and math).

• Convener space for presentations and events for GE and the community.

• Community work lounge for visitor reception with a variety of options for employees, customers and public visitors to use as a “co-work” area.

• Innovation and exploration centre highlighting the past, present and future of GE.

• Employee community space, including a cafeteria and other amenities.

The “new and improved” public outdoor space—including an expanded Harborwalk—will comprise about 1.5 acres. The campus will also feature a public coffee bar and a bistro-style restaurant.

The facility will rely on the Energy Use Index for similar buildings and will be LEED v.4, says the company. Key green features include encouraging the use of public transportation, walking or biking for employees and visitors (the site will have only 30 parking spots), reuse of existing buildings, a rooftop solar system, and vegetated roof areas.