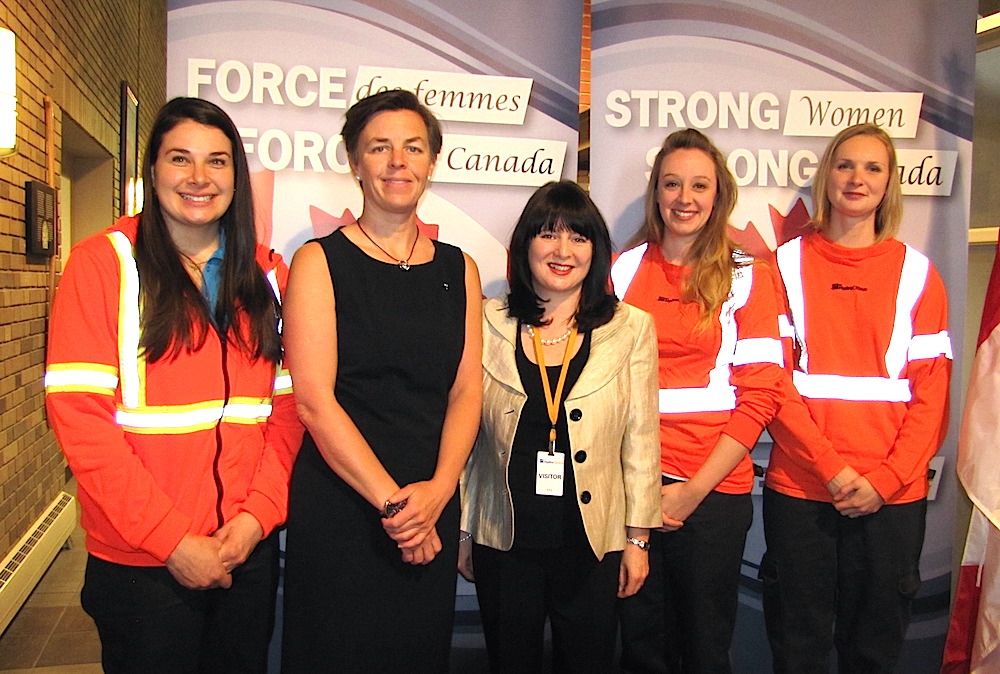 May 13, 2015 – “We’re building on the work of our Bridging the Gap program, [which] looked at the challenges in getting women to enter and stay in the electricity sector,” explained Michelle Branigan of Electricity Human Resources Canada (EHRC) to EBMag. “One of the recommendations that emerged from Bridging the Gap centred around mentorship and developing mentorship models.” Enter EHRC’s newest initiative:

“Connected Women” is a national mentorship model for women seeking to enter or advance in the electricity and renewable energy industry. “Over half the jobs in this sector are in trades, technology or the engineering field, and we’re still—in 2015—woefully underrepresented in those technical and trades jobs,” added Branigan.

Funded by Status of Women Canada, the program will be piloted with graduates of Alqonquin College’s Women in Electrical Engineering Technology (WEET) program. “We’re developing it, at this stage, for women who are working to enter or to advance in the sector. So that means women who are currently studying in a trade, or they’re actually working in the sector and looking for support,” Branigan said.

“So we partnered with [WEET] on this project, and we’re going to use that cohort as a pilot; so they will be the mentees, and we will be partnering them with women who are working in the industry, in the utilities,” explained Branigan.

She added that Connected Women will also include a number of women who are already working in the sector as mentees, too, “who are going to be looking for support internally as they advance in the sector”.

“We always have to remember there are two challenges to getting more women in the industry: first of all, we have to attract them to the sector and, then, once we get them in, we have to make sure that we keep them,” noted Branigan.

Men need not apply?
When asked whether men have any role in Connected Women, Branigan explained that—at EHRC’s most recent Steering Committee meeting—is was decided to include men as mentors in the program.

“In the same way that you don’t want a sector discounting 50% of the population as a potential source of supply, potential workforce, neither do we as part of this project want to exclude 50% of the workforce as a valuable support mechanism for women who are looking to enter and stay in the sector; because there are a fantastic number of men out there who are fantastic champions. But, overwhelmingly, the discussion led to the fact that, absolutely, men are part of the solution… men play a huge part in that role of ensuring we have a diverse workforce,” noted Branigan.

How does it work?
EBMag asked Branigan how the program will unfold, using a WEET graduate as an example.

“So we have a mentee from Algonquin College who is looking to get into a job in the sector… what we will do is have a list of mentors who have volunteered to participate in this program. What we will be developing will be a process, an actual model, that will allow us to match the mentor to the mentee,” Branigan explained.

“As part of that, we will be developing a tool, a handbook, for both the mentor and the mentee that outlines [their] roles and responsibilities. We’ll also be doing some training with the mentors as to the types of things you should be working on, types of discussions that you should be having with your mentees, to support them. And then what we’ll do is roll out a 6-month-long mentor-mentee relationship. [Depending on geographical location] Some of these relationships may be face-to-face, where you go out for a coffee, you meet up maybe once every couple of weeks, once a month, or they may be via Skype and via telephone,” she added.

“For us, the whole goal also is to have these women—who are acting as mentees—then themselves become mentors to other women, so it’s almost like a passing of the torch,” she said.

Utility companies across the country—along with women who would like to be considered as mentors—are encouraged to participate by contacting EHRC.

The not-for-profit EHRC is a source of human resources information and tools to help the Canadian electricity industry match workforce supply and demand.