Contractors surveyed attributed part of the growth in building construction costs to skilled labour shortages and high labour costs. Despite a decline in number of vacancies for construction jobs from April to July, the vacancy rate remains high, which has kept upward pressure on wages in the industry. 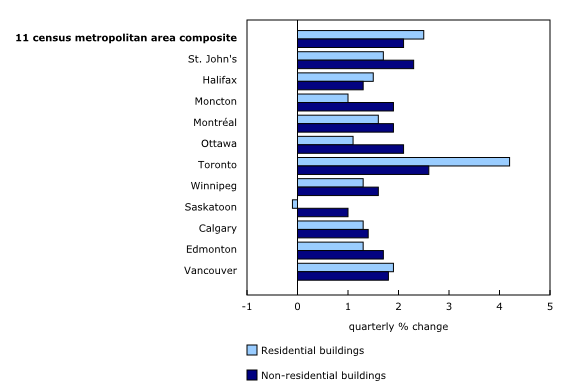 Non-residential building construction costs grew at a slower pace during the third quarter, following a peak in the previous quarter. This deceleration was recorded in every CMA, except in St. John’s.

Cost increases in non-residential building construction remained largely driven by price growth in cement and concrete. Higher prices for cement, concrete, and other materials are linked to continued robust demand for construction materials alongside supply challenges due to labour shortages, as well as temporary shutdowns at major plants early in the summer.

By building type, the largest increases to construction costs were measured in factories (+2.3%) and office buildings (+2.1%) in the 11-city composite.

Building construction costs for residential construction in the 11-city composite rose 18.7% year over year in the third quarter, moderating from highs registered over the past year. Toronto (+25.9%) and Edmonton (+19.5%) recorded the highest growths and drove up the composite.

Non-residential construction building costs rose 12.5% year over year in the third quarter, also moderating from the previous quarters of 2022. Construction cost increases were the largest in Toronto (+15.6%), Montréal (+13.0%) and Ottawa (+12.6%).