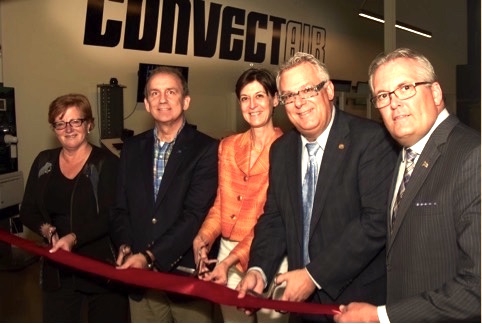 The centre acts “as a liaison” between the housing and heating industries, says the company, adding it became a reality following Muller Group’s private investment of $3 million. Muller is Convectair’s parent company, based in Paris, France.

According to Convectair’s president & CEO, Bernard Pitre, the centre’s objective is to create an R&D hub “for the democratization of energy conservation best practices—both within the industry and among consumers”.

The centre is equipped with modern testing and training areas that account for the “technical, climatic and cultural needs unique to Quebec”, such as a fluid mechanics chamber (the Vortex) that let’s you view the movement of heat in a restricted area in real time to compare the effectiveness of heating appliances, and a bi-climatic chamber (Klimat -37.5 C) equipped with a refrigeration system that can simulate temperatures down to -37.5 C.

Through partnerships with teachers at Dawson College and Collège Lionel-Groulx, Convectair says the expertise centre will provide “unique training and certification opportunities” to current and future industry professionals, including architects, engineers and electricians.

In fact, as early as this summer, over 500 building and construction specialists will receive training on how to best install energy-efficient heating appliances, and on the overall importance of energy-efficient facilities.

Starting in September 2016, the centre will provide specialized training to engineers and architects to help them meet their continuing education requirements.

“The centre will not only contribute to reinventing the way in which Quebecers heat their homes through introducing technologies that are optimized to maximize energy efficiency, but we also hope that it will help create greater awareness about the changes we need to make as a society,” added Pitre.