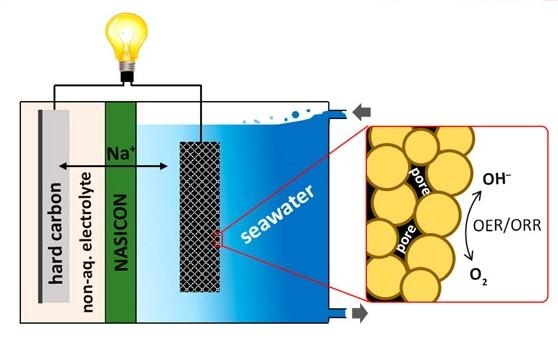 Scientists have developed a battery that uses seawater as the catholyte (combined cathode and electrolyte). Image courtesy American Chemical Society.

December 7, 2016 – With the ubiquity of lithium-ion batteries in smartphones and other rechargeable devices, it’s hard to imagine replacing them. But the rising price of lithium has spurred a search for alternatives, and one up-and-coming battery technology uses abundant, readily available seawater.

Making this option viable is one step closer with a new report on a sodium-air, seawater battery appearing in the journal “ACS Applied Materials & Interfaces”.

Sodium-air (sodium-oxygen) batteries are considered one of the most promising, and cost-effective alternatives to today’s lithium-ion, but some challenges remain before they can become a commercial reality.

Soo Min Hwang, Youngsik Kim and colleagues have been tackling these challenges, using seawater as the catholyte (an electrolyte and cathode, combined). In batteries, the electrolyte is the component that allows an electrical charge to flow between the cathode and anode. A constant flow of seawater into and out of the battery provides the sodium ions and water responsible for producing a charge.

Unfortunately, the reactions have been sluggish, so the researchers endeavoured to find a way to speed things up.

For their new battery, the team prepared a catalyst using porous cobalt manganese oxide nanoparticles. The pores create a large surface area for encouraging the electrochemical reactions needed to produce a charge. A hard carbon electrode served as the anode.

The resulting battery performed efficiently over 100 cycles with an average discharge voltage of about 2.7 volts. This doesn’t yet measure up to a lithium-ion cell, which can reach 3.6 to 4.0 volts, but the advance is getting close to bridging the gap, the researchers say.

— With files from American Chemical Society