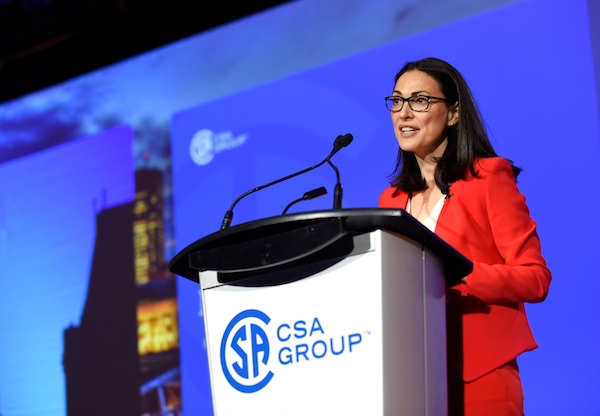 Aug. 9, 2019 – When Mary Cianchetti, CSA Group’s president of standards, was first given an opportunity to work with the organization in 2004, as a project manager in its nuclear power program, she says it took her a while to figure out who she’d be working for.

“It was all a bit cloak-and-dagger,” she recalls. “I don’t know how they found me!”

Fittingly, then, in her current role—which she took on three years ago—Cianchetti is trying to increase the organization’s transparency through active outreach efforts. By way of example, CSA made a commitment last year to provide ‘free view’ online access to all of its standards (similar to an initiative by UL, which has encouraged other organizations to do the same).  “We’re at about 70% now and we’ll continue to move forward,” she says. “We have a long-term vision to support standards education in every post-secondary institution across the country.”

When Cianchetti was growing up, she wanted to be an aerospace engineer. She got her aerospace experience at 16 as a pilot in air cadets, but ended up studying mechanical engineering instead, at the University of Toronto (U of T), before working in wire and cable manufacturing.

“My studies were very theoretical,” she recalls. “I didn’t really learn hands-on until I got into the field.”

With that disconnect between school and career in mind, another recent CSA initiative has been the academic challenge, which gets students involved in standards development. It is important to draw them to the process because, while CSA membership has grown steadily over the years, it has done so primarily through the addition of new categories of standards to its portfolio, rather than through the inclusion of younger generations of professionals.

“Our average member is now 55 years old,” Cianchetti says. “There is a perception that we only recruit the most prominent experts in their fields to sit around our table. We need to reach out to younger people, too.”

In addition to drawing in new members, who volunteer their time, Cianchetti explains CSA is hiring project managers right out of school.

“I was drawn to this organization as a project manager myself by the chance to merge my technical skills with communications, but I stayed because of the passion here,” she says. “Everyone wants to leave a legacy and make the world better. Our mandate really focuses on the core goal of the social good through standards development.”

And with the CE Code a significant part of CSA’s legacy, the involvement of electrical contractors is vital.

“My message to the electrical industry is we will stay ahead of the curve as the world changes and we want to make sure end users are heard,” she says, “So, don’t be afraid to get involved!”