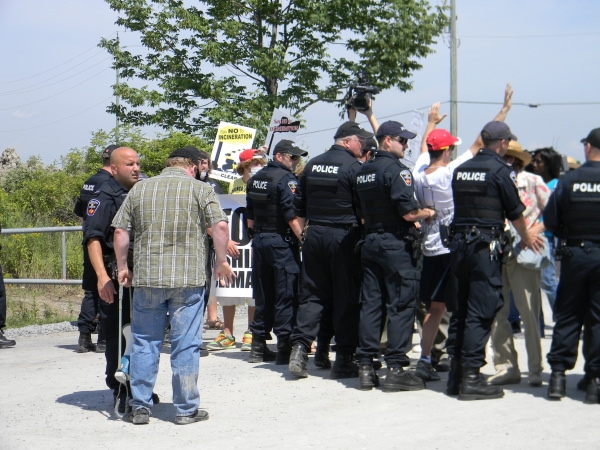 17 August 2011 – Despite delays caused by anti-incineration protesters, EBMag was there to cover the official groundbreaking ceremony for the new Durham York Energy Centre (DYEC), which is located in the Municipality of Clarington (Ontario) in a huge site slated to be the Clarington Business Park.

“We’re finally ready to put the shovel in the ground!” beamed Durham regional chair and CEO Roger Anderson, who was also the primary target of protesters’ insults. Speaking to concerns protesters have over pollution, Anderson said, “We [council] have our skin in the game… We live here. Our kids live here”.

He added that the new DYEC will meet the toughest emissions standards in the world. Meantime, York Region chair and CEO Bill Fisch explained that when the new facility comes online, about “90% to 95% of residual waste from York and Durham Regions will not go into landfill”.

The DYEC promises to be a state-of-the-art, energy-from-waste (EFW) facility. It will process the residential waste that remains after Durham and York Regions’ “aggressive and highly successful composting and recycling programs” while recovering materials and energy. Through thermal mass burn technology, the municipal solid waste is fed into a furnace where it is burned at temperatures above 1000 C. The remaining ash is then shipped to landfill or reused in product manufacturing.

“The Regional Municipality of Durham has been working toward a long-term waste management solution since 1999, and we’ve found an answer in the Durham York Energy Centre,” said Anderson. “Now that construction is about to commence, I expect the facility to be fully operational by the end of 2014.”

The EFW process also includes production of high-pressure steam, which is fed through a turbine generator that produces electricity. When operating at design capacity, the electricity sold to the provincial grid is sufficient to power about 10,000 homes, while the future district heating system will produce heat equivalent to the needs of 2200 homes.

“Covanta is excited to be a part of this tremendous partnership with the Regions of Durham and York,” said Anthony J. Orlando, president and CEO of Covanta Energy. “Bringing complex infrastructure projects like this to fruition takes strong leadership and courage of conviction to challenge the status quo. The Regions’ should be applauded for their vision and efforts to bring this project to reality.”

“Today’s groundbreaking signals the start of construction of the first energy-from–waste facility built in Ontario in 22 years,” said Fisch. “York and Durham Regions are committed to the diversion of residual waste from landfill and thermal treatment of waste is smart technology to achieve our goals.”

Funding for this project was made possible by the federal Gas Tax Fund, which “provides municipalities with a source of stable and predictable funding for environmentally sustainable infrastructure, while also helping to stimulate economic development, create new jobs, and improve infrastructure to support economic growth and long-term prosperity”.