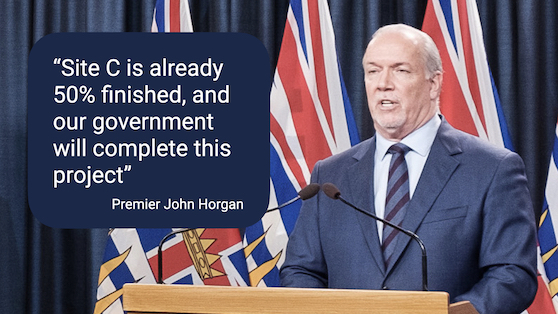 March 6, 2021 – The Government of British Columbia says it is acting to address the challenges facing Site C to ensure the project is completed safely, “providing British Columbians with clean, reliable and affordable electricity for the next 100 years”.

“The project is facing new challenges, and we are committed to managing it in the best interests of British Columbians,” said Premier John Horgan. “Cancelling [Site C] would cause people’s electricity rates to skyrocket, and we will not burden people with additional financial stress during these difficult times with nothing to show for it.

The province has brought in new leadership at BC Hydro: Doug Allen has been appointed the new chair of BC Hydro’s board, replacing Ken Peterson, who was appointed chair in July 2017.

Peter Milburn has been retained to provide oversight on implementing the recommendations, which include “enhancing the independence, mandate and expertise of the Site C Project Assurance Board, and strengthening BC Hydro’s risk reporting and management”.

The revised cost estimate to complete Site C is $16 billion, reports the province, with a one-year delay to completion (now 2025).

The costs to cancel the project, including sunk costs and the costs to remediate the site, would be at least $10 billion, says the province.