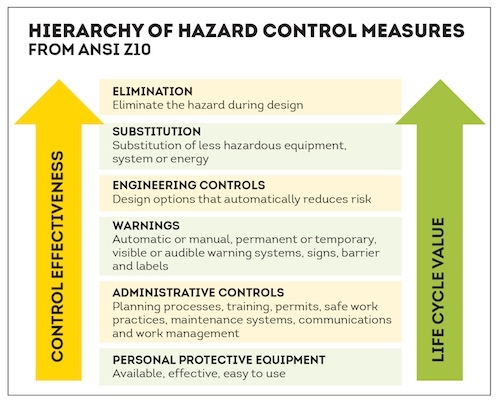 September 12, 2016 – At some point in our lives we have all heard—or perhaps even repeated—variations of the common phrase: Don’t worry about things you can’t control.

With respect to workplace electrical safety, there has been little change over the past 10 years with regard to non-fatal electrical injuries, and the issue isn’t a lack of awareness, intent or budget, but rather a lack of effective action. It is a lack of control.

When considering the arc flash hazard, we need to ask two questions (which are, in fact, the same for any hazard):

Electrical hazards have been identified in the Ontario Ministry of Labour’s “Safe At Work Ontario” strategy as requiring attention to reduce injuries and create safer workplaces. Roughly half of electrical incidents causing injury—includes deaths and serious burn injuries from arc flash—were caused by working directly on energized electrical equipment.

According to statistics compiled by CapSchell Inc. (a Chicago-based research and consulting firm specializing in preventing workplace injuries and deaths), 5 to 10 arc flash explosions resulting in hospitalization occur around electrical equipment every day in the North America.

Thankfully, both CSA Z462 “Workplace electrical safety” and, in the States, NFPA 70E “Electrical Safety in the Workplace” have been aligned with the Hierarchy of Risk Control in ANSI Z10 “Occupational Health & Safety Management Systems”, which neatly addresses the two questions above.

CSA Z462 Annex 0, “General Design Requirements 0.2.2”, provides you with a design option that enables you—right from the design stage—to eliminate hazards or reduce risk by:

But think about it… warnings, awareness training and PPE do nothing to reduce the likelihood of an arc flash event or its magnitude!

For those insisting PPE does, in fact, reduce the severity of arc flash exposure, let’s pause and consider what it means to hang your hat on arc-rated clothing: there is still a 50% probability the wearer will receive second degree burns from an arc flash event.

Surely we cannot accept this as safe.

Electric arcing may produce temperatures as high as 35,000 C and, in addition to causing severe burns, there is the very real possibility of hearing loss and eye injury, as well as lung damage and blast injury from the pressure wave of an arc blast.

The positive news is we can control both the likelihood of exposure as well as its magnitude with proven technology that is readily available and already being used by companies who strive to be leaders in workplace electrical safety.

Control the likelihood of exposure

The first and obvious step is to de-energize the circuit before conducting any work whenever practical. When this is impractical or unsafe, then consider options for reducing the likelihood of an arc flash event occurring.

3) A great majority of electrical faults are of the phase-to-ground type. High-resistance grounding [HRG] will insert an impedance in the ground return path and below (at 5 kV nominal or below), leaving insufficient fault energy and thereby helping reduce the arc flash hazard level.

This is consistent with the “Industrial Power System Grounding Design Handbook” (J.R. Dunki-Jacobs, F.J. Shields, Conrad St. Pierre), which states 95% of all electrical faults are phase-to-ground faults.
Meantime, IEEE 141 “Recommended Practice for Electric Power Distribution for Industrial Plants” 7.2.2 states “there is no arc flash hazard [on HRG systems] as there is with solidly grounded systems, since the current is limited to approximately 5 amps”.

Sustained arcing faults in low-voltage apparatus are often initiated by a single-phase fault to ground which results in extensive damage to switchgear and motor control centres.

Whether the specifics are actually 95%, 89%, or what have you, the simple fact is the vast majority of arcing faults start as single phase to-ground faults, so by employing high-resistance grounding—which has been around for some 50 years and used in all manner of industries, from petrochemical and food processing to automotive and data centres—we can significantly reduce exposure to the arc flash hazard.

(Granted, HRG does not protect against phase-to-phase faults, nor does it lower the incident energy calculation and, therefore, additional control steps must be taken to be sure of an electrically safe workplace.)

All this, of course, begs the question: why isn’t high-resistance grounding the standard practice for grounding industrial facilities? HRG as a technology is recommended by IEEE, recognized by CSA Z462 and NFPA 70E, and promoted by FM Global, yet it is still not the default option when making grounding decisions for industrial facilities.

Reduce the magnitude of exposure

2) Arc flash relay. An arc flash relay typically uses light sensors to detect the light produced by an arc flash event. Once a certain level of light is detected the relay will issue a trip signal to an upstream overcurrent device.

An arc develops in milliseconds, leading to the discharge of enormous amounts of energy. The energy discharged in the arc is directly proportional to the square of the short circuit current and the time the arc takes to develop (i.e. energy = I2t).

The damage resulting from the arc depends on the arcing current and time; of these two factors, time is the most easily controlled and managed. Rules of thumb for different arc burning times are:

•    35 ms or less: no significant damage to persons or switchgear, which can often be returned to use after checking for insulation resistance.
•    100 ms: minor damage to switchgear that requires cleaning and, possibly, some minor repair. Personnel could be at risk of injury.
•    500 ms: catastrophic damage to equipment, and personnel are likely to suffer serious injury.

The goal of arc mitigation technology is to protect personnel and property but, to effectively accomplish this, we must first detect the arc then cut the flow of current to it in as quickly as possible. The target is to achieve a total reaction time of 100 ms or less from the point of arc detection to circuit isolation.

Arcs produce light at intensity levels exceeding 20,000 lux. This light can be detected through special arc detection optical sensors, which are connected to a relay system with a typical operating time under 1 ms, making it the fastest arc flash detection technology currently available. The operating time is independent of the fault current magnitude, since any current detector elements are used only to supervise the optical system.

With optical arc protection technology installed, the relay operating time is essentially negligible compared to the circuit breaker operating time, and the cost is fairly low since current transformers are only needed on the main breakers.

When we sum up the circuit breaker operating time and the optical arc detection time, we are well below the target of 100 ms—regardless of the age and speed of the circuit breaker—and have mitigated damage to a lower, safer level.

By simply changing from standard coordination and instantaneous settings on the relay (suggested by some consultants as sufficient) to a protection system using optical arc detection, you substantially reduce incident energy levels.

1) Energy-reducing active arc flash mitigation system. This system can reduce the arcing duration by creating a low-impedance current path, located within a controlled compartment, to cause the arcing fault to transfer to the new current path, while the upstream breaker clears the circuit. The system works without compromising existing selective coordination in the electrical distribution system.

Arc quenching has been used in Europe for more than 30 years but, due to concerns over the mechanical stresses caused by initiating a 3-phase bolted fault, it is yet to be fully embraced in North America.

The solution may be as simple as modifying the approach to add an impedance into the circuit; the arc is detected by an optical detection relay, then a signal is sent to initiate the arc quenching device which, in turn, closes onto a resistor placed between the quencher and each phase of the busbar. The high levels of fault current are dampened and controlled by a resistor on each phase, thereby eliminating concerns over mechanical stresses.

The addition of arc quenching technology, controlled through an impedance, could result in lowering the incident energy levels in the event of an arc flash to very low and even safer levels.

A safer workplace can be easily achieved when we simply change our approach by conducting risk assessment during the design phase of the project. Then we move forward and conduct the arc flash study, define the risk and quantify the hazard.

Next we employ elimination technology (like high-resistance grounding) and technology to lower the hazard level (arc flash detection relay or active arc mitigation system), redo the study, and re-quantify the hazard and the risk (which will be much lower).

Only then do we post the warning labels, purchase the PPE and conduct the necessary training.
A workplace where the likelihood of an arc flash is 95% lower, and where the impact of an arc flash can be minimized to very low levels, is possible right now. We just need to take control and use technology already available.

Sergio Panetta is the vice-president of engineering at I-Gard Corporation. With over 26 years of electrical engineering experience (including switchgear design, commissioning and troubleshooting), Sergio actively promotes awareness of electrical safety on a global front. A senior member of the Association of Professional Engineers of Ontario, he was recently awarded Consulting Engineering status with the APEO professional body. In addition to working on a number of industry working groups dealing with electrical safety and best practices (e.g. UL, IEC, CSA and IEEE), Sergio is the author and owner of several U.S. Patents related to power resistors. He received his Masters of Electrical Engineering from McMaster University.

* This article also appears in the September 2016 edition of Electrical Business Magazine. Check out our ARCHIVE page for more from the issue.